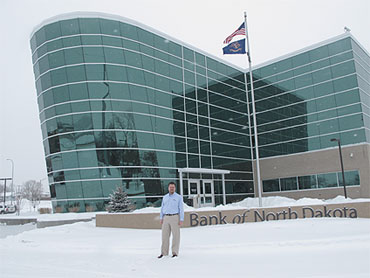 It has no automatic tellers or drive-up windows, doesn't issue credit cards, and tends only a few thousand checking and savings accounts. Its only location is a glass, steamboat-shaped headquarters near the Missouri River, where the business moved from its original 1919 home in a former auto assembly plant.

The Bank of North Dakota - the only state-owned bank in the United States - might seem to be a relic. It was the brainchild of a failed flax farmer and one-time Socialist Party organizer during World War I.

But now officials in other states are wondering if it is helping North Dakota sail through the national recession.

Gubernatorial candidates in Florida and Oregon and a Washington legislator are advocating the creation of state-owned banks in those states. A report prepared for a Vermont House committee last month said the idea had "considerable merit." Liberal filmmaker Michael Moore promotes the bank on his Web site.

"There's a lot of hurt out there, a lot of states that are in trouble, and they're tying the Bank of North Dakota together with this economic success that we're having right now," said the bank's president, Eric Hardmeyer.

Hardmeyer says he's received "tons" of inquiries about the bank's workings, including questions from officials in California, Michigan, New Mexico, Ohio and Washington state. North Dakota has the nation's lowest unemployment rate at 4.4 percent, soaring oil production and a robust state budget surplus - but Hardmeyer says the bank isn't responsible for the prosperity.

"We are a catalyst, perhaps, or maybe a part of it," he said. "To put this at our feet is flattering, but it frankly isn't true."

The Bank of North Dakota serves as an economic development agency and "banker's bank" that lessens the loan risks of private banks and helps them finance larger projects. It offers cheap loans to farmers, students and businesses.

The bank had almost $4 billion in assets and a $2.67 billion loan portfolio at the end of last year, according to its most recent quarterly financial report. It made $58.1 million in profits in 2009, setting a record for the sixth straight year. During the past decade, the bank funneled almost $300 million in profits to North Dakota's treasury.

The bank has the advantage of being the repository for most state funds, which can be used for loans and occasional relief for private banks that need a jolt of cash during sluggish credit markets.

"We think of ourselves as kind of a little mini-Federal Reserve," Hardmeyer said.

The state earns roughly 0.25 percent less interest than state agencies would get from a commercial institution. The bank also pays no state or federal taxes and has no deposit insurance; North Dakota taxpayers are on the hook for any losses.

The Bank of North Dakota was a cornerstone of the agenda of the Nonpartisan League, a farmers' political insurgency spawned by anger about outside control of North Dakota's credit and grain markets.

Supporters gained control of the legislature and the governorship within five years. The movement's power quickly waned, but two of its state-owned businesses survived - the Bank of North Dakota and a state flour mill and grain elevator in Grand Forks.

From the 1940s until the early 1960s, the bank served mostly as a public funds depository and municipal bond buyer, said Rozanne Enerson Junker, author of a 1989 history of the bank. Its economic development activity has greatly expanded since.

Gary Petersen, president of the Lakeside State Bank of New Town, a community on the Fort Berthold Indian Reservation in northwestern North Dakota, said the state bank is often willing to take a stake in local development projects.

"In my experience, you make a contact with the (Bank of North Dakota), and their question is, 'How do we get this done?"' Petersen said. "They're not looking at ways to knock it down."

Alerus Financial, a Grand Forks bank, has sold about $115 million of its $600 million loan portfolio to the Bank of North Dakota, both to spread its risk and to provide itself with additional loan money, said Karl Bollingberg, Alerus' director of banking services.

"If you're left to find other participating banks, that can be very challenging," he said. "They don't have the same interest that the Bank of North Dakota has in helping you to do deals."

Mauro Guillen, a professor of management at the University of Pennsylvania's Wharton School of Business, said it is unlikely other states would open similar banks, in part because "the political culture here is very much against that kind of a thing."

Some state and federal agencies, such as the Small Business Administration, already have economic development programs similar to those at the Bank of North Dakota, Guillen said.

Bollingberg said the idea of other state-owned banks would also likely rouse opposition from private banks that wanted to keep their share of state deposits. "Because the (Bank of North Dakota) has been here so long, no banks know what it was like to have those deposits," he said.

Hardmeyer said he, too, was always doubtful others would take up North Dakota's model, but now he's not so sure.

"When I see what's going on around the country, it's not quite as far a leap as I thought it once was," he said.