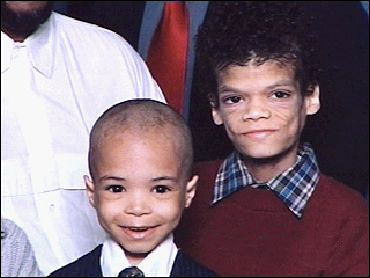 It was four weeks ago when the story first broke.

A boy was found eating food out of a garbage can – a 19-year-old boy who weighed only 45 pounds. It happened in New Jersey -- to not just one, but four adopted boys, whose parents, authorities allege, were starving them.

The four boys, ages 9 to 19, and weighing 136 pounds all together, were removed from the home. The parents who adopted them, Raymond and Vanessa Jackson, were thrown in jail.

How did this happen? And how is it that the Jackson's five biological children, and three other girls in their care, are all healthy - while the four adopted boys were allegedly starving?

The biological Jackson children try to explain how it happened in an exclusive interview with Correspondent Dan Rather. They wanted to speak for their parents who were advised by a lawyer not to say anything.

Although Vanessa and Raymond Jackson agreed to tell their story to 60 Minutes II, they changed their minds after a lawyer advised them to cancel the interview.

They did, however, meet briefly with Rather in New Jersey. "I miss my kids. A lot," says Vanessa Jackson. Her husband, Raymond Jackson, adds: "Really...We want our children back."

Their four adopted boys, and three girls - two adopted and one a foster child – appear in a family portrait. It was taken before the children were removed from their home after what happened on Oct. 10. A neighbor of the Jacksons made a 911 call to Collingswood Police just before 3 a.m., and reported seeing a kid eating out of a trash can.

The boy eating garbage was not a young kid but a 19-year-old who identified himself as Bruce. He weighed 45 pounds and was 4 feet tall.

Police went to the house and found Bruce and his three adopted brothers, who also looked underfed: Michael, age 9 and 23 pounds; Tyrone, age 10 and 28 pounds; and Keith, age 14 and 40 pounds. They were four of 11 children living with the Jackson family.

That day, the four boys were taken to hospitals, the three girls were quickly placed in foster homes, and two weeks later, the parents were sent to jail. They were charged with aggravated assault and child endangerment.

"If it weren't for the Collingswood Police Department on Oct. 9, responding to that neighbor's call, I think it's very likely that some of these children would have perished," says New Jersey child advocate Kevin Ryan, who is working with prosecutors to investigate what happened.

Ryan said Bruce was out rummaging around garbage cans because he was hungry.

Why would the Jacksons starve some of their children, and not others?

"Well, I think, that is the question. How is it possible that Mr. and Mrs. Jackson could have singled out their boys for such poor treatment and yet the girls flourished," says Ryan. "I don't know what's in Mr. and Mrs. Jackson's heart. This could be a couple that was simply in way over their heads and didn't know how to care for these children. Or it could be a case of monstrous cruelty. That, I don't know yet."

That family picture, which showed the frail boys, was published from coast to coast. Authorities were quoted as saying the boys allegedly "were locked out of the refrigerator," and fed only "peanut butter, uncooked pancake batter and cereal." Bruce, it was said, was so hungry that he "chewed on wallboard." And it was reported that the four boys had not been to a "doctor in at least five years."

But none of these allegations has shaken the faith of Raymond and Vanessa Jackson's friends at the "Come Alive! New Testament Church." They believe the parents have been wronged, and that the Jacksons had taken in kids that others did not want - children who were older, sicker, and more troubled.

The Jacksons, however, had their own defense, and said that some of the children were abused before their adoption, victims of fetal alcohol syndrome, sexual and physical abuse, and most importantly, eating disorders.

The leading supporter of the Jacksons is Harry Thomas, pastor of the church where they have worshipped for 15 years. "I am convinced, absolutely convinced, that they are not guilty," says Thomas. "No doubt, not even the slightest."

But how does he explain the appearance of the four adopted boys, all of whom look as if they'd been starved and suffering from malnutrition?

"People look at these children and they're very surprised. We have seen them as they came in. And they have always been small in stature," says Thomas. "I wasn't about to run up every week and say, 'How come you're so short?'

Pastor Thomas paid more than lip service to the Jacksons. He paid their bail, putting a lien on his home to have them freed after nine days in jail. Within hours after leaving jail, the Jacksons went to church, and in a dramatic and emotional scene, into the arms of their five biological children. The parents were also embraced by parishioners - not as villains but victims.

Raymond and Vanessa Jackson insist they are innocent, but because they mostly followed their lawyer's advice to stay quiet, their biological children – son Raymond, and daughters LaRae, Vernee and Renee -- decided to sit down with 60 Minutes II.

"Any good lawyer would say, 'Don't say anything because they'll twist what you say. They told us, 'We shouldn't be talking to you,'" says the children's uncle, Bill Jackson, who also participated in the interview.

"But you know what? We're here. I'm gonna tell you something right now. If my brother and Vanessa were guilty, I wouldn't be here."

The Jacksons' biological son, Raymond, tells Rather that the he knows from firsthand knowledge that Bruce and his foster brothers were not being starved.

"Well, I mean [Bruce] would eat normally the same things we would eat," says Raymond Jackson. "We would eat together. I mean, we would have the same meals. We'd eat breakfast, lunch and dinner and stuff together."

"The facts are I was one of the main cooks also. I would make huge pots of beans and rice with like meat and casseroles. I love Italian food, so we would always have Italian dishes and Asian influence dishes," adds sister, Renee Jackson. "And I even remember Bruce would be the one sitting next to me eating that, and he told me how much he even loved my casseroles, my tuna casseroles."

What was their explanation for the condition of their adopted brothers?
"That would be medical. But I mean, I'm not like a doctor to tell you in detail what's wrong with them," says sister, LaRae Jackson. "But I know it's medical, because I know for a fact … I mean I live in the house. I know that they eat."

The Jacksons say that Bruce suffered from an eating disorder called "rumination," which was allegedly evident in a disturbing home movie where Bruce apparently regurgitated the food he swallowed and chewed it again. His three adopted brothers reportedly imitated some of his behavior.

Child agency files reveal that Bruce had eating disorders predating his adoption, and there is medical evidence that starvation can cause long-term eating disorders. That's why they say Bruce ate garbage and chewed wallboard, and why they say there was an alarm on the kitchen door at night, but not a lock on the refrigerator.

LaRae says she wasn't surprised that the neighbors found Bruce rummaging through the gargage: "He's done it before. Usually, when something extreme happens, he'll probably go and do it. Like recently our dog died. And it probably upset him. So it's probably something from his past. Like every time he would—probably-- something bad happened, he would do that. 'Cause I know he used to go through the trash before he even came with us."

The biological children offer more than words. They also had home movies of their childhood – at home playing cards, and at church, with loving introductions by their father.

Ryan, however, looked at the same scenes and saw a very different picture.

"You know, when the children were found, they had lice. Their teeth were rotten, their bellies were distended. You could see their ribs. These were boys, really, on the verge of very serious medical problems."

New Jersey child welfare caseworkers visited the Jackson home 38 times over the last four years and never once reported the boys were suffering. Nine workers have been fired but not charged with any crime.

How could this have happened? And why come down hard on the Jacksons and not on the caseworkers who visited the home?

"Government is never going to love a child the way a family must," says Ryan. "At the end of the day, it's a parent's responsibility to provide the love and attention and nurture that children need. In this case, the public agency is responsible. But Mr. and Mrs. Jackson are primarily responsible."

The Jackson children whom 60 Minutes II spoke to insist their parents were responsible -- responsible for adopting troubled kids whom nobody else wanted, kids like Keith, Tyrone, Michael and especially Bruce.

But Ryan says that home and shelter are not enough, and he was eager to share what he says are fresh facts that reveal that something was going terribly wrong in the Jackson home.

It involves what he says has happened to the adopted boys in the weeks since. One boy is now in a foster home; the other three, including Bruce, are still in hospitals.

"When he was rescued from that home on Oct. 10, Bruce weighed less than most of the television sets that people will be watching this show on tonight. And today he weighs almost 65 pounds," says Ryan.

"His other brothers have gained 16 pounds, 14 pounds and 9 pounds, respectively. That's dramatic. And all that's going on there is they're being fed. No steroids, no medicine, no other medical intervention. They're just being fed for the first time in a very long time."

The weight gain is perhaps the most harmful evidence in this strange and sad story. And the health of the boys since being taken from the home will help a grand jury, scheduled to convene in a few weeks, decide if they should be indicted for systematically starving their children.

Will Raymond and Vanessa Jackson, who took in so many lost children, be able to get their children back?