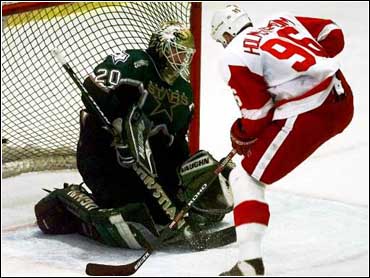 A little patience paid big dividends for the Dallas Stars.

After Detroit controlled play for the first two periods, Scott Thornton and Aaron Gavey scored 45 seconds apart early in the third as the Stars stormed back for a 5-2 victory Wednesday night.

"Patience is something we take pride in," said Mike Modano, who had a goal and an assist during the period. "We write our keys down before the game, and we stick to them. More often than not, it helps us win."

This was the seventh time the Stars have won when trailing after two.

"It's been a real positive thing to know we can come from behind in the third, especially against a team like Detroit," Modano said.

"We're kind of like two personalities," Shanahan said. "We had a good start, good middle, and bad finish. This is the second time in three games we've come out and had a disastrous third period."

Thornton's fourth goal, on the rebound of Kirk Muller's shot, tied it at 2 just 1:11 into the third period.

Forty-five seconds later, Gavey skated in unchecked on the left side, took a pass from Modano and snapped it just inside the post, past goalie Chris Osgood for a 3-2 lead.

"I think this is huge," Stars coach Ken Hitchcock said. "This builds a lot of confidencin this team."

This was the third meeting between Dallas and Detroit. They split the first two, each winning on the other team's ice.

Shanahan's 33rd goal, a blast from the right circle that handcuffed goalie Ed Belfour, gave Detroit a 2-1 lead at 9:44 of the second period.

"Detroit had stymied us," Hitchcock said. "Once they got the 2-1 lead, we weren't getting a sniff. Then we got that goal early in the third and it seemed to change everything."

Kozlov scored his 16th goal at 1:15 on the first shot of the game, taking a pass in the left circle from Steve Duchesne and slapping the puck between Belfour's pads.

Muller got the puck away from Detroit defenseman Chris Chelios near the Red Wings' blue line to set up Hull's 18th goal. Muller pushed it ahead to Thornton who fed it to Hull skating in alone. Hull drew Osgood down with a fake, then flipped the puck under the cross bar to tie it 1-all with 7:00 left in the first.

Each team had other good chances. Kozlov, on a clean shot, hit the post midway through the first period during a 4-on-4 situation. Osgood made a good stick save to rob Modano during a Dallas power play late in the period.

Osgood had to be quick for a stick save on Hull who glided in unchecked with 9:30 left in the second.

"This was playoff hockey," Detroit forward Darren McCarty said. "The refs called a couple penalties early, then pretty much just let us play."