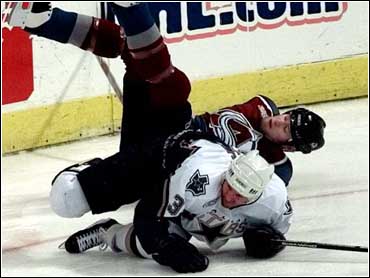 There was little to separate the Dallas Stars and Colorado Avalanche in the Western Conference finals last season. That was true again on Sunday night.

Mike Modano's power-play goal late in the second period gave the Stars a 1-1 tie with the Avalanche.

"There wasn't a lot of room on the ice, just like the conference finals last year," Stars coach Ken Hitchcock said. "It was a man's game out there, not for weak people."

Dallas prevailed in a tightly played seven-game series en route to its first Stanley Cup, and on Sunday night the teams picked up where they left off last spring.

Greg de Vries had Colorado's only goal and Roy made 18 saves for the struggling Avalanche.

"Under the circumstances, we should be happy with the point," Roy said. "We'll build on that. I thought we played good enough defensively to win 1-0 tonight."

Dallas' best chance in the overtime came on Brett Hull's breakaway that was turned aside by Roy with 14 seconds left.

Colorado went the other way with Milan Hejduk speeding down the right side, but Modano tied him up and prevented a good shot with four seconds remaining.

Colorado took early control and scored ts only goal at 9:47 of the first period. De Vries' shot from the right circle hit off Belfour's pad and into the net for the defenseman's second goal of the season. At that point, the Avalanche held a 10-1 shots advantage and finished the period with a 13-2 edge in shots.

"I thought we had a fantastic first period," Roy said. "We were all over them."

Dallas recovered in the second period, tying the game at 1 with 29.8 seconds left on Modano's 29th goal. With Dallas on its fifth power play, Hull's blast was stopped by Roy, but the puck bounced to Modano, who fired a one-timer past Roy from the right circle.

"It hit two skates and then went right to him, so we had a little bad luck there," Roy said.

Modano has seven goals in his last seven games and has played well on the defensive end.

Avalanche defenseman Alexei Gusarov suffered a broken leg in the second period and Colorado coach Bob Hartley said Gusarov is out for the season.

Gusarov's leg collided with the leg of Dallas' Guy Carbonneau on a play in front of the Stars' goal.

"He tried to cut in front of the net," Carbonneau said. "I think he tried to get out of the way and that's when it happened. I'm not trying to hurt anybody. It's unfortunate."