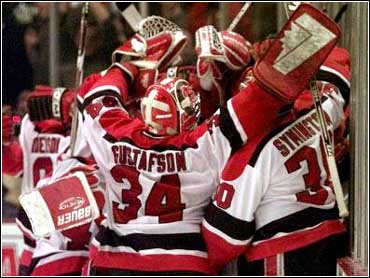 St. Lawrence's Robin Carruthers poked his own rebound past Boston University goalie Rick DiPietro 3:53 into the fourth overtime period Sunday giving the Saints a 3-2 win in the longest NCAA tournament game in history.

The goal ended a memorable goaltending display by a pair of freshman DiPietro and St. Lawrence's Derek Gustafson, who combined for 149 saves in the game.

St. Lawrence's players were sent into a wild celebration around Carruthers. BU players merely slumped in exhaustion after playing what amounted to three regulation games in little more than one day.

St. Lawrence (27-7-2) will play Boston College (28-11-1) in a national semifinal game April 6 in Providence, R.I. The Eagles beat Michigan State and top-seeded Wisconsin in the West Regional in Minneapolis.

St. Lawrence, champions of the Eastern Collegiate Athletic Conference, haven't been to hockey's final four since 1988. The Saints lost that year in overtime in the championship game to Lake Superior State.

The 123 minutes, 53 seconds of game time shattered the record for longest NCAA tournament contest of 100:28 set by Maine and Michigan in the 1995 semifinals.

A series of team and individual tournament records also fell during the marathon, most notably for number of saves which both DiPietro (77) and Gustafson (72) broke. The previous single-game tournament record was 62 set by Providence's Chris Terreri against Boston College in 1985.

Carruthers got an assist on his winning goal from Jim Lorentz, who poked the puck away from three Terriers along the side boards to the right of DiPietro. Carruthers took the loose puck and charged toward the BU goal. DiPietro stopped his first attempt but Carruthers took the rebound and jammed it in between DiPietro's legs.

St. Lawrence appeared ready to take command with goals by Brandon Dietrich with 2:46 to play in the first period and by Jack O'Brien 2:01 into the second.

But thanks to repeated power play opportunities, BU (25-10-7) got some momentum back. As one power play was about to expire, BU's Mike Pandolfo cut down the left side of ice and wristed a shot which eluded Gustafson to make it 2-1 St. Lawrence with 7:12 left in the second period.

The Terriers, Hockey East regular champions, got the equalizer with 8:10 left in regulation when Brian Collins tipped in Chris Dyment's slap shot from the left circle.

The goaltenders then took over, with Gustafson and then DiPietro taking turns saving the game for their teams for the first three overtime periods.

DiPietro was only a little less spectacular but just as effective.

Gustafson is on a 5-game winning streak. He last lost on Jan. 7 vs. Wisconsin.

BU beat St. Cloud State on Saturday in a first-round playoff game while St. Lawrence had a bye.