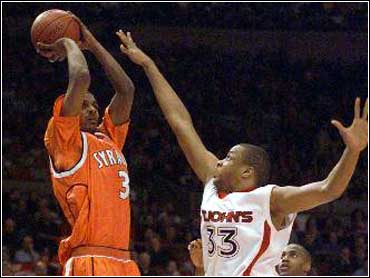 St. John's had a lot going against it Saturday night.

First, there was the cloud of the NCAA's second investigation into possible rules violations in two weeks. Then point guard Erick Barkley, who missed two games after the last investigation, was in obvious discomfort over the final minutes because of dehydration. Lastly, there was some recent history of a big blown lead to contend with.

The Red Storm managed to stave off all that with a 76-75 victory over ninth-ranked Syracuse for their fifth straight victory, this in front of a sellout crowd of 19,410 at Madison Square Garden.

St. John's had an 11-point lead with 4:48 to play but scored just two more points, on Reggie Jessie's rebound basket with 28 seconds to play. It was eerily similar to last month's 65-64 loss to Ohio State when the Buckeyes scored the final 11 points of the game.

"The last five minutes of each practice we've been working really hard on game situations," said Barkley, who was given fluids intravenously after the game. "We just really stepped it up tonight."

When Shumpert missed the second free throw, St. John's (18-6, 10-3 Big East) worked the ball to Lavor Postell on the left side. His fallaway jumper was well off the mark but it bounced off the backboard and to Jessie, who laid it in for his fifth and sixth points of the game.

Syracuse (21-3, 10-2), which didn't have a timeout, worked the ball around and Allen Griffin's drive with six seconds left was off the mark. Jessie grabbed his eighth rebound of the game and was fouled with 5.6 seconds left.

He missed the front end of a 1-and-1 but the rebound bounced long and Syracuse's Jason Hart fell to the floor trying to control it and the ball bounced away as the buzzer sounded.

Boosty Thornton finished with 22 points for St. John's, 10 in the opening five minutes of the second half when the Red Storm took the lead and held it until the final minute.

"I took advantage of them leaving me open," Thornton said. "They left me wide open."

Hart's 3-pointer with 5:11 left brought the Orangemen within 71-63, but Thornton answered with his fourth 3 of the game 30 seconds later. Those would be St. John's final points until Jessie converted the rebound.

"One thing they had better learn from tonight is that the game is never over," Jarvis said. "We weren't going to put it away until a minute to go, then we had to get the lead back."

Ryan Blackwell's 3-pointer with 2:34 left brought Syracuse within 74-70. Griffin stole a pass by Barkley near midcourt and went for a dunk that made it a two-point game with 2:13 left and Hart tied the game on a drive with 1:25 left.

Barkley, who got sick to his stomach during one timeout and was doubled over in pain quite a bit as the game wound down, missed the front end of a 1-and-1 with 1:14 left and Shumpert went to the line with 51 seconds left to give Syracuse the lead.

When the game ended, Barkley fell to the floor near midcourt and laid there until teammate Donald Emanuel carried him to the locker room.

"It happened to me once in high school. I guess it's just my adrenaline pumping," Barkley said of the dehydration.

He spoke with reporters just seconds after leaving the table where he received the IV treatment.

"It's a great feeling as well as a great accomplishment. Everything we've been through the last couple of weeks just shows the character of our team and that only the strong survive," said Barkley, who had 16 points and nine assists while playing 40 minutes. "I'm just happy most of this stuff off the court is starting to end and the rumors about me are over a little bit."

Neither the school nor the NCAA has offered any kind of timetable for the second investigation. Reports have indicated Barkley's possible invovement with an agent is among the things being looked at by the NCAA.

Anthony Glover had 16 points for St. John's and Postell finished with 14.

Hart had 18 points for Syracuse, Blackwell added 15 and Thomas and Shumpert 12 each.

The loss was the third in five games for the Orangemen after opening 19-0.

The victory was the 1,600th for St. John's, the fifth school to reach that figure, behind Kentucky, North Carolina, Kansas and Duke.

"To be just one of five programs all-time to get that number is unbelievable," Jarvis said. "It is great for me and these players to be a little bit of history."