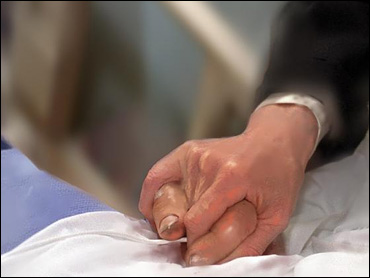 A husband or wife with a debilitating illness can hasten your own death, a study suggests.

The researchers blame the stress and the loss of companionship, practical help, income and other support that can occur when a spouse gets sick.

"You can die of a broken heart not just when a partner dies, but when your partner falls ill," said chief researcher Dr. Nicholas Christakis at Harvard Medical School.

The study at Harvard and the University of Pennsylvania was published Thursday in The New England Journal of Medicine. The research, backed by the National Institutes of Health, analyzed Medicare records from a representative national sample of 518,240 elderly couples over nine years.

Past research has shown that the spouses of sick people face higher risks of illness and death themselves - a phenomenon sometimes called the "caregiver burden" or the "bereavement effect." But this study examined an extraordinarily large group of couples and also quantified the risk associated with a range of illnesses.

Researchers and geriatric experts said the effects of a spouse's illness on the partner should be taken into account by families, social service workers, doctors and policymakers.

The researchers said the risk may apply not only to spouses, but also to children and even close friends.

If the sick spouse dies, the partner's risk of death - whether from accidents, suicide, infections or pre-existing conditions, such as diabetes - shoots up fivefold, rising by 21 percent for men and 17 percent for women, the researchers said.

Older people were especially vulnerable to the effect.

On the other hand, most types of cancer did little or nothing to raise the companion's risk of dying, apparently because so many patients are able to function well between treatments, the researchers said.

Richard Schulz, a University of Pittsburgh psychologist who has researched the same effect, generally endorsed the study's findings. But he said it may not have fully accounted for the initial health status of the partners with sick spouses.

The risk numbers for the sexes were not easily comparable, partly because men tend to die sooner than women under normal circumstances. However, the study hinted that men may be more vulnerable than women to the death risk from a sick spouse.

That would fit with other research suggesting that men derive more health benefits from marriage than women do.