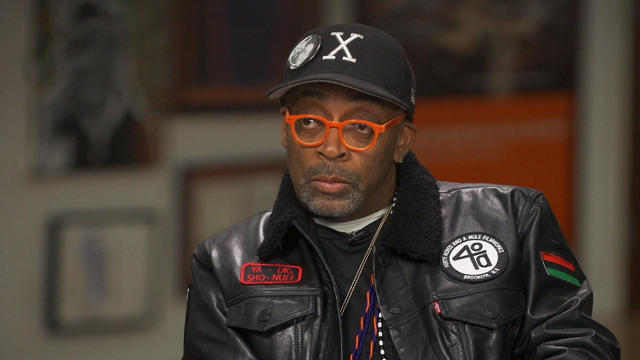 The 1986 movie "She's Gotta Have It" marked the feature length debut of director Spike Lee. Lee followed it up with a string of landmark movies including "Do the Right Thing," which earned him an Oscar nomination for best screenplay. More than 30 years later, his career has come full circle with the Netflix premiere of his new TV series "She's Gotta Have It" which re-imagines the original story in 2017.

"She's Gotta Have It" tells the story of a polyamorous, black, female artist who is juggling four different lovers in the recently-gentrified neighborhood of Fort Greene, Brooklyn.

"The Fort Greene and Bed Stuy in 'She's Gotta Have It' the film is no more," Lee told "CBS This Morning: Saturday" co-host Alex Wagner.

Today, the neighborhood where Lee grew up and set his story is much different – both on screen and off. Lee was 29 and just out of NYU film school when he released "She's Gotta Have It."

The film went on to make more than $7 million.

"My grandma had complete faith in me. She said 'Spikey I know nothing about filmmaking but if that's what you want to do I'm gonna support you,'" Lee recalled.

The movie explores themes of sexuality and empowerment through the story of a young artist named Nola Darling. At the time, the film was considered very risqué.

"Nobody knows this. We were having trouble with the ratings system 'cause it was too much with the naked black people, black bodies on the screen and so they would tell us there's too much sex. The day we opened, I got a call from the MPAA saying I had to make a cut. The film was playing!" Lee said.

It was opening day so Lee called his editor Barry Brown and sent him to the theater to cut half of the scene while the film was still playing.

"The projectionist looks at me and says 'so what are you doing?' So I know that there's a moment where they part and they're going to come back together so I say I got a cut there. Get to the end of the scene and cut again," Brown said. "And what was remarkable was it went right through."

This time around, Lee made sure to include female perspective in developing the 10-episode first season. He enlisted his wife, Tonya Lewis Lee, whom he credits with bringing the story to TV, as well as five female writers including the Pulitzer Prize-winning playwright Lynn Nottage.

Lee credits his late mother with his love for cinema, artifacts of which are on display throughout his offices. But the Oscar-winning director says despite his success, there is still a long way to go for people of color – and women – looking to make it in Hollywood.

Lee got a second chance to re-imagine Nola Darling at precisely the moment when gender and sexuality are making national headlines.

"I'm going to give you an honest answer, OK? I don't tell audiences what the lesson is. I respect my audience, I never say well you come out of the theater and here are the takeaways. I don't do takeaways. I leave it up to the audience. I respect their intelligence," he said.

What does he think of the conversation happening around sexual harassment right now?

Dorian survivor on Abaco: "Nothing left"

Army did "nothing" for soldier who reported sexual assault, mom says