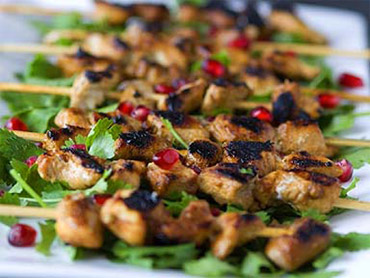 Marc Murphy says he first got into cooking when he realized that he couldn't afford to be a professional race car driver, and has spent his time since crafting mostly Italian and French cuisine in the United States and Europe, alike.

He's now executive chef and owner of both Landmarc and in New York.

Marc was also something of a trailblazer on "The Early Show on Saturday Morning," becoming the show's first "Chef on a Shoestring" to make a dish viewers voted for.

Each week, viewers get to let us know which of three choices they want our "Chef on a Shoestring" to make the following week. [Click here to vote for next week's main course!]

As our "Shoestring" chef, Marc attempted to whip up a delicious, three-course dinner for four, featuring spiced chicken kebabs, creamy tomato soup and spores, on our stingy budget of $40.

His chef's hat was also automatically tossed into our "How Low Can You Go?" competition, in which the "Shoestring" chef whose ingredients cost the least will be invited back to make our year-end holiday feast.

Beefsteak tomato: Among the most commonly marketed tomato variety is the beefsteak tomato, which is delicious both raw and cooked. It's large, bright red and slightly elliptical in shape. (Souorce: Epicurious.com)

Immersion blender: This handheld BLENDER is tall, narrow and has a rotary blade at one end. It has variable speeds, is entirely portable and may be immersed right into a pot of soup (or other mixture) to puree or chop the contents. Many immersion blenders come with a whisk attachment (good for whipping cream), and other accoutrements such as strainers or beakers for mixing individual drinks. Some also come with wall mounts. (Souorce: Epicurious.com)

Kebab: Small chunks of meat, fish or shellfish that are usually marinated before being threaded on a skewer and grilled over coals. Pieces of vegetables can also accompany the meat on the skewer. Also called shish kebab and shashlik. (Souorce: Epicurious.com)

Heat a large stockpot on medium heat and add the butter. When it has melted add the onions and garlic. Cook until the onions start to soften (about five minutes). Add the celery, carrot, tomato and potato let cook for another five minutes. Add 2 1/2 quarts of water and let simmer uncovered for thirty minutes. When all the vegetables are soft puree until smooth with an immersion blender. Add the half and half and blend.

Make two grilled cheese sandwiches and brown them in as saute pan with the butter. Cut into bite size cubes and brown again on all four sides. Float in the soup.

Cut the chicken into 2 inch cubes. Mix with the rosemary, garlic, salt, pepper and olive oil. Let marinate for at least 1 hour. Thread the chicken on to a skewer and then a mushroom, then another piece of chicken then a piece of red pepper and so on until the skewers are full. Heat your grill on high for 10 minutes and clean it well. Place the skewers on the grill for 5 minutes a side. Serve.

Smores in the Oven


So, how did Marc fare in our "How Low Can You Go?" competition?

Marc made our leader's board!: