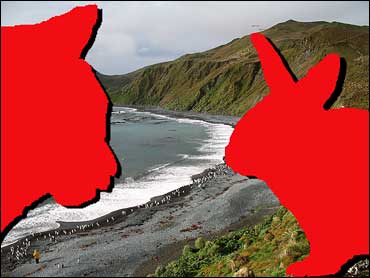 It seemed like a good idea at the time: Remove all the feral cats from a famous Australian island to save the native seabirds.

But the decision to eradicate the felines from Macquarie island allowed the rabbit population to explode and, in turn, destroy much of its fragile vegetation that birds depend on for cover, researchers said Tuesday.

Removing the cats from Macquarie "caused environmental devastation" that will cost authorities 24 million Australian dollars (US$16.2 million) to remedy, Dana Bergstrom of the Australian Antarctic Division and her colleagues wrote in the British Ecological Society's Journal of Applied Ecology.

"Our study shows that between 2000 and 2007, there has been widespread ecosystem devastation and decades of conservation effort compromised," Bergstrom said in a statement.

The unintended consequences of the cat-removal project show the dangers of meddling with an ecosystem - even with the best of intentions, the study said.

"The lessons for conservation agencies globally is that interventions should be comprehensive, and include risk assessments to explicitly consider and plan for indirect effects, or face substantial subsequent costs," Bergstrom said.

Located about halfway between Australia and Antarctica, Macquarie was designated a World Heritage site in 1997 as the world's only island composed entirely of oceanic crust.

It is known for its wind-swept landscape, and about 3.5 million seabirds and 80,000 elephant seals migrate there each year to breed.

Authorities have struggled for decades to remove the cats, rabbits, rats and mice that are all nonnative species to Macquarie, likely introduced in the past 100 years by passing ships.

The invader predators menaced the native seabirds, some of them threatened species. So in 1995, the Parks and Wildlife Service of Tasmania that manages Macquarie tried to undo the damage by removing most of the cats.

Several conservation groups, including the International Union for Conservation of Nature and Birds Australia, said the eradication effort did not go far enough and that the project should have taken aim at all the invasive mammals on the island at once.

"It would have been ideal if the cats and rabbits were eradicated at the same time, or the rabbits first and the cats subsequently," said University of Auckland Prof. Mick Clout, who also is a member of the Union's invasive species specialist group.

Clout and others said the Macquarie case illustrates the struggle that Australia and New Zealand have had trying to remove invasive species from their islands, mostly in a bid to protect seabird populations. They have targeted dozens of islands over the past few decades with mixed success.

Liz Wren, a spokeswoman for the Parks and Wildlife Service of Tasmania, said authorities were aware from the beginning that removing the feral cats would increase the rabbit population. But at the time, researchers argued it was worth the risk considering the damage the cats were doing to the seabird populations.

"The alternative was to accept the known and extensive impacts of cats and not do anything for fear of other unknown impacts," Wren said.

The parks service now has a new plan to use technology and poisons that were not available a decade ago to eradicate rabbits, rats and mice from the island.

The project to be launched in 2010 will use helicopters with global positioning systems to drop poisonous bait that targets all three pests. Later, teams will shoot, fumigate and trap the remaining rabbits, Wren said.

Some of the earlier critics are now behind this latest eradication effort to remove the island's last remaining invasive species.

"Without this action, there will be serious long-term consequences for the majestic seabirds...and for the health of the island ecosystem as a whole," said Dean Ingwersen, Bird Australia's threatened bird network coordinator.
By AP Environmental Writer Michael Casey