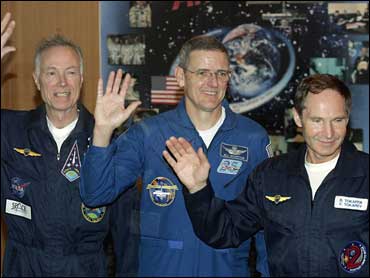 The two residents aboard the international space station floated outside the complex Monday to install a huge camera and discard a probe that monitors the environment outside the station.

"Oh, it's gorgeous," Astronaut William McArthur Jr. said as he opened the hatch.

He and Cosmonaut Valery Tokarev were delayed by about an hour as they tried to exit the airlock, which did not completely depressurize the first time around. The airlock on the American side of the complex was used for the first time in more than two years.

About halfway through the spacewalk, McArthur and Tokarev had made up most of the time, reports CBS News correspondent Peter King. The spacewalk was scheduled to last 5½ hours.

This is the 63rd spacewalk devoted to station assembly and maintenance, the third EVA for McArthur and the first for Tokarev, says CBS News Space Consultant Bill Harwood. It is the 18th staged from the Quest airlock module but the first since a contamination issue in the module's heat exchanger forced station crews to rely solely on a Russian airlock at the aft end of the outpost. The last spacewalk staged from Quest occurred in April 2003.

The new camera the crew planned to install will help future station astronauts as they add new segments onto the orbiting outpost.

"It's hard to imagine how blind you are inside the station to see yourself," McArthur said in a pre-flight interview. "These types of camera views are critically important to doing robotics operations."

The environmental probe, which hasn't worked in at least two years, will be tossed into orbit, where after about 100 days it will incinerate in the atmosphere.

Harwood says the probe is being removed because it will be in the way of construction in the near future, and because it might break off and foul other equipment.

"The tasks themselves are not overly challenging," said Anna Jarvis, who trained the crew and monitored the spacewalkers from the ground.

The pair, who arrived at the station in early October, helped each other into their spacesuits without the assistance of a third crew member. Since the 2003 space shuttle Columbia tragedy, the station has been operating with a reduced crew.

The space station's Russian airlock and spacesuits had been used for recent spacewalks because space station managers had discovered cooling and contamination problems with its U.S. airlocks not long after the Columbia disaster.

When shuttle Discovery returned to orbit in July, it brought new U.S. spacesuits, and the U.S. airlock also had a new heat exchanger installed.

NASA manager Pete Hasbrook said some of the tasks need to be completed as the station's crew awaits the next shuttle, which won't come until at least May.

While Monday's spacewalk is Tokarev's first time to float in orbit, it is McArthur's third venture outside. McArthur has flown on three shuttle missions during which he visited Mir and the international space station since joining NASA in 1990. Tokarev, a Russian military pilot, first visited the space station in 1999 aboard space shuttle Discovery.