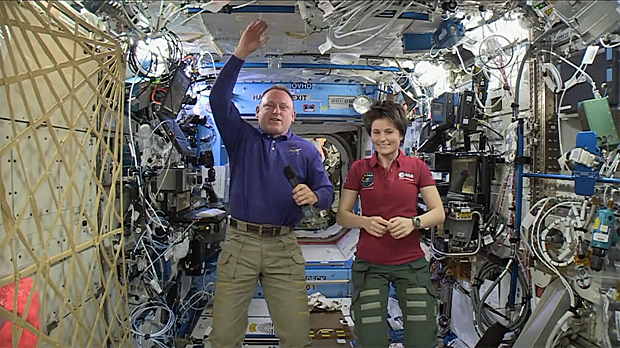 Taking time off for the holidays, the crew of the International Space Station is preparing for a busy start to the new year, with the arrival of a SpaceX cargo ship next week and three U.S. spacewalks in February to begin work needed to add docking ports for new commercial crew ships.

While there is no champagne on board to celebrate the New Year holiday in space, "we'll break open a grapefruit juice or tropical punch, whatever we have on board," Wilmore told CBS News Tuesday in a space-to-ground interview.

Floating in the U.S. segment of the station, joined by European Space Agency astronaut Samantha Cristoforetti, Wilmore said his New Year's resolution was to pay more attention to experiment instructions and procedures to avoid mistakes.

"One thing you think about constantly is, don't let me mess this up!" he said. "Because there are people on the ground who put a lot of effort into getting it up here and we don't want to be the ones to mess it up. So my New Year's resolution is to try to pay better attention to every step of every procedure so we get it all right."

Launched Sept. 25, Wilmore, a shuttle veteran, has spent the past three-and-a-half months aboard the station. Cristoforetti, making her first spaceflight, arrived Nov. 23. She said her New Year's resolution is to spend more time shooting video to share the experience of spaceflight with the public.

One aspect of spaceflight that is difficult to share is the sensation of weightlessness. While she expected spectacular views of Earth, Cristoforetti said living in microgravity was much more thrilling than she anticipated.

"Lots of people tell you haw wonderful it is to view Earth from the window, and it is," she said. "I would not say that's been a surprise, because I was expecting it to be magnificent. I guess what I did not expect was how much I enjoy floating.

"I just love it, I just love to float, to be able to move in three dimensions, to let my body completely relax, to be able to have dinner on the ceiling if I want, to work on a wall or bounce off another wall. I never expected that to be so incredibly enjoyable."

The station crew faces a busy start to the new year with launch of a SpaceX Dragon cargo ship Jan. 6. If all goes well, the automated cargo craft will pull up to within about 30 feet of the station next Thursday and then stand by while Wilmore, operating the lab's robot arm, locks onto a grapple fixture. Flight controllers then will maneuver the capsule into position for berthing at the Earth-facing port of the forward Harmony module.

Wilmore and Virts, assisted by Cristoforetti, then will prepare for three spacewalks in February to install cabling needed by new docking mechanisms that will be installed later to enable linkups by Boeing and SpaceX spacecraft scheduled to begin crew ferry flights in 2017.

In March, astronaut Scott Kelly and cosmonaut Mikhail Kornienko will blast off aboard a Soyuz spacecraft to begin a one-year stay aboard the station. While four cosmonauts logged flights longer than one year between 1987 and 1999, the upcoming flight will be a first for the international lab complex.

During the course of their extended stay in space, Kelly and Kornienko will serve as test subjects for a battery of experiments to learn more about how the space environment affects human physiology, data crucial for planning eventual long-duration flights to Mars.

Wilmore said Kelly and Kornienko will need to pace themselves because "this is a marathon."

"You've got to pace yourself. I mean, you could literally work yourself to death, there's so much to do, you could work 24 hours a day and never get everything done. So you definitely have to think ahead, pace yourself, maybe a couple of three-day weekends thrown in there would be nice for those guys."

Cristoforetti said the station is more than roomy enough for a long-duration visit -- she called it a "complex, big, grand, huge facility" -- but staying healthy could be a challenge.

"We have plenty of space up here," she said. "We're obviously respectful of each other's private space, and there is enough space to find your own private space if you need it. So I wouldn't be concerned about that.

One thing they won't have to worry about is getting a good night's sleep. In an earlier interview with the BBC, Cristoforetti said sleeping in microgravity was especially restful.

"I sleep great up here, it's the best sleep I've ever had in my life," she said. "People have different preferences. But personally, I just love to sleep in a sleeping bag, and I just love to leave it floating. Each of us has a little cabin, it's about the size of the old phone booths for those who are old enough to remember those, and I just let myself float in there."

While she might bounce off the walls a few times during the night, "it's very gentle bouncing, it does not wake me up at all, and that feeling of just having my body completely relaxed and no pressure on any side of my body is just wonderful. I just love it."