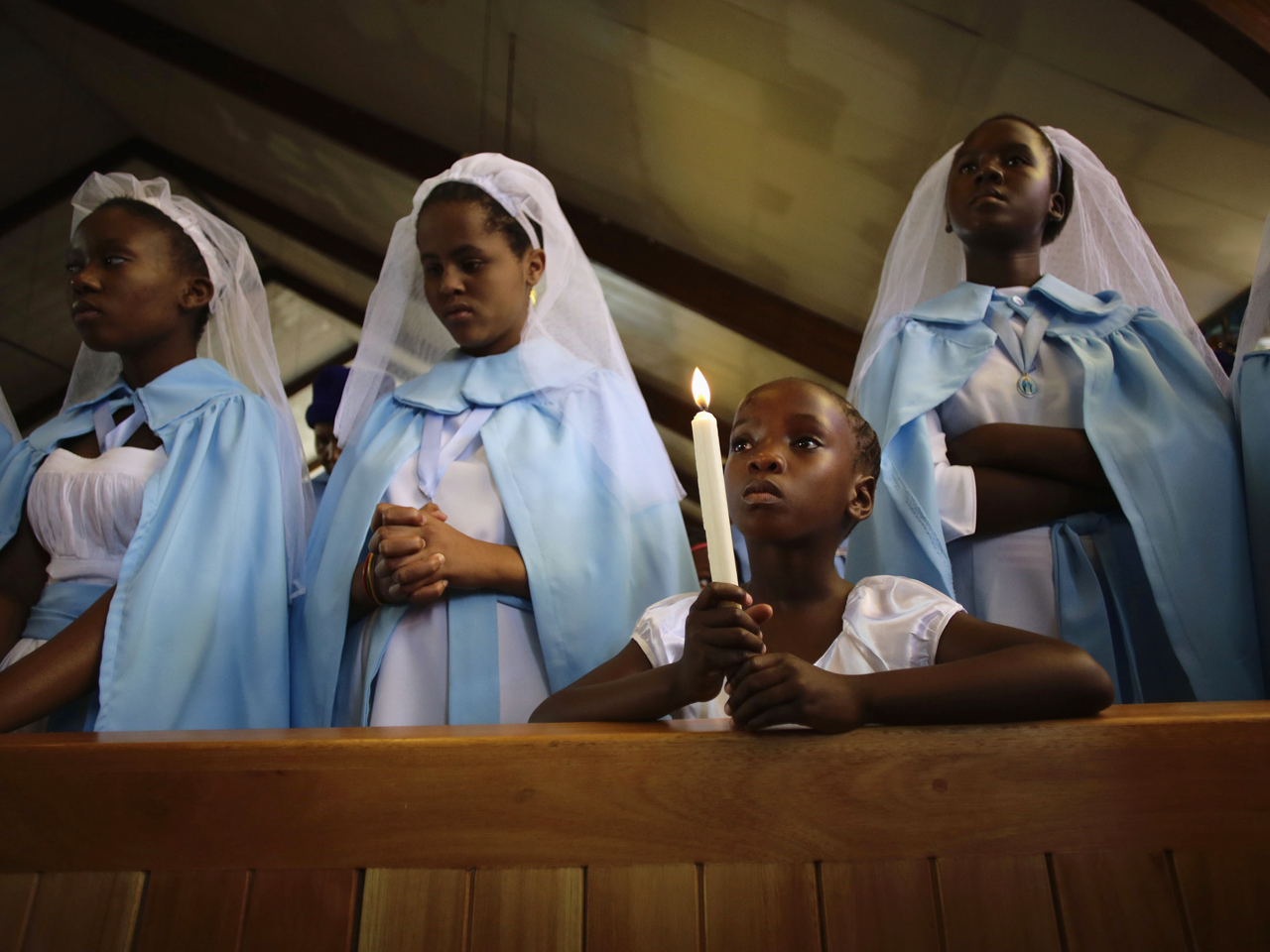 JOHANNESBURG - South Africans of all races flocked to houses of worship Sunday for a national day of prayer and reflection to honor Nelson Mandela, unified in their love for a historic figure whose funeral is expected to be one of the biggest in modern times.

At the Regina Mundi Church that was near the epicenter of the Soweto township uprising in 1976 against white rule, Father Sebastian J. Rossouw described Mandela as "moonlight," saying he offered a guiding light for South Africa. Hundreds of people attended the Mass.

"Madiba did not doubt the light," Rossouw said. "He paved the way for a better future, but he cannot do it alone."

During the service, worshippers offered special prayers for the anti-apartheid leader and lit a candle in his honor in front of the altar. Off to the side of the sanctuary was a black and white photo of Mandela, who died Thursday at age 95.

Mandela's ex-wife, Winnie Madikizela-Mandela, joined one of his grandsons, Mandla Mandela, and South African President Jacob Zuma in a prayer service in a Methodist church in Johannesburg.

"We felt it important that we should have a day where all of us as South Africans can come together and pray for our first democratic president and reflect on his legacy," Zuma said. "But it is also to pray for our nation ... to pray that we not forget some of the values he fought for."

Zuma said Mandela had forgiven even those who had kept him in prison for 27 years, and that he had opposed both white and black domination.

"60 Minutes" correspondent Bob Simon visited South Africa in 1990 to report on Mandela's attempts to reach out to his former enemies, working with then-President F.W. de Klerk to forge a new constitution that would include black South Africans. He wanted to abolish an odious system, not the men who ran it.


Inside a small, hilltop church behind Mandela's property in the eastern village of Qunu, where he will be buried next Sunday, about 50 people held a raucous, celebratory service. A man in a blue robe set the tempo by banging on a goat-skin drum. Men, clapping, formed a tight huddle as mostly barefoot women danced on the cement floor in a circle around them.

"There is still hope in the hardship that you are facing daily," Mzingelwa told the congregation.

In an affluent and predominantly white suburb of the capital Pretoria, parishioners prayed for Mandela at what was once a worship center for pro-apartheid government and business leaders. They prayed in silence as a picture of Mandela was beamed onto the wall above the church's pulpit, the event starkly highlighting the enormous changes that have come to this country.

Pastor Niekie Lamprecht of the Dutch Reformed Church of Pretoria East said the congregation's overwhelmingly white 1,600 parishioners have changed, and that Mandela himself was the driving force. The idea of showing a picture of him inside the church two decades ago would have been unthinkable.

"What helped the white people of South Africa was Mr. Mandela's attitude," Lamprecht said. "He said, 'Let's forgive,' and he forgave. That created a space for people to feel safe ... at a time when the expectation was that there was going to be a war."

A service was also held at St. George's Cathedral in Cape Town, where a prayer was said for a man whose journey from prisoner to president inspired the world.

"May his long walk to freedom be enjoyed and realized in our time by all of us," worshippers said in a prayer.

Ahmed Kathrada, who was sentenced to life in prison with Mandela in 1964, said he was informed shortly before Mandela's death on Thursday night that his old friend was about to die.

Kathrada said Graca Machel, Mandela's wife, conveyed the message to him through another person that "the doctors have said, 'Anytime.'"

A national memorial service for the man who, as the country's first black president forged a new multiracial, democratic South Africa, will be held at a Johannesburg stadium on Tuesday.

Mandela's body will lie in state at the Union Buildings, the seat of government in Pretoria, from Wednesday to Friday, followed by his funeral and burial in Qunu next Sunday.

Among those who have already indicated that they will be coming to South Africa are U.S. President Barack Obama and his two predecessors, George W. Bush and Bill Clinton.

King Willem-Alexander and Foreign Minister Frans Timmermans will attend on behalf of the Netherlands.