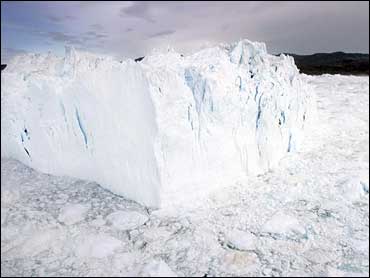 Around the middle of the 19th century the Arctic took a sooty turn for the worse, according to researchers studying how humans have affected the climate.

Soot can darken the snow, causing it to absorb sunlight, warm up and melt. That, in turn, can add to local climate warming by exposing darker ground which absorbs energy from the sun that the white snow would have reflected.

Ice cores from before about 1850 show most soot came from forest fires. But since then, black soot in the snow has increased several times over and most now comes from industrial activities, according to a paper in Thursday's online edition of the journal Science.

In a separate paper in that journal, a team of British researchers forecast that climate warming will slow for about a decade, then bound back to record-setting temperatures.

That group added new detail to improve the accuracy of complex computer models that calculate changes in weather and climate to come up with their new outlook.

The soot study was done by a team led by Joseph R. McConnell of the Desert Research Institute in Reno, Nevada.

They found that the older soot samples contained vanillic acid, an indicator of burning conifer trees.

In the more recent years the soot was seven times more common and contained a larger concentration of non-ocean sulfur, an indicator of industrial emissions.

Soot concentrations peaked in 1906-1910 and remained high for decades. Sulfur emissions declined following the Clean Air Act in 1970, they noted.

In the early 20th century the Arctic warmed more than anywhere else on Earth, Richard B. Alley of the California Institute of Technology observes in a commentary on the report, noting a "broad correspondence between the soot peak and the observed warming."

They added the effects of natural climate changes, such as the El Nino phenomenon in the Pacific Ocean, fluctuations in ocean circulation and anomalies in ocean heat content to their computer models. In general, climate models have focused on the impact of outside factors such as solar radiation, atmospheric aerosols and greenhouse gases.

The new outlook calls for a slowdown in warming for the next few years, but then an increase again.

They forecast that at least half of the years after 2009 will be warmer than 1998, the warmest year to date according to the Met Office. The U.S. National Climate Data Center ranked 2005 in a virtual tie with 1998.

The arctic soot research was supported by the U.S. National Science Foundation, the Desert Research Institute, Office of Naval Research and NASA. The climate forecasters were supported by the United Kingdom Department of Environment, Food and Rural Affairs and the U.K. Government Meteorological Research Programme.