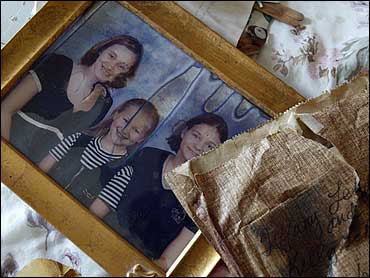 One week after Hurricane Katrina turned the region into a disaster of biblical proportions, miles-long lines of vehicles crawled into Jefferson Parish on Monday as residents were allowed to return for brief inspections of what's left of their homes.

The traffic began moving into the parish west of New Orleans at about 6 a.m., and officials planned to allow traffic in for 12 hours, though they encouraged residents to inspect their property, pick up personal items and leave.

Resident could only get in provided they showed a valid ID proving residency, brought food, had a full tank of gas and didn't drink the water.

Among those returning was Diane Dempsey, a 59-year-old retired Army lieutenant colonel who stopped at the water's edge less than a mile from the house where she grew up and where her aunt lives.

"I'm going to pay someone to get me back there, anything I have to do," she said, sobbing while standing amid boats beached on Veterans Highway. "A lot of these people built these houses anticipating some flood water but nobody imagined this."

Most of the single-story bungalow homes in the neighborhood had water nearly to the rooflines.

Watch Live: Biden to call for $100 payments for getting vaccinated

The suburban parish, which has 460,000 residents, has been closed since a mandatory evacuation just before Katrina hit. Wide portions of Metairie and Kenner suffered heavy flooding, and authorities said thousands of homes were damaged.

In New Orleans, Army Lt. Gen. Russell Honore estimated that fewer than 10,000 people remained in the city, based on aerial reconnaissance.

Jefferson Parish President Aaron Broussard warned residents that they would find all traffic signals destroyed, no open stores and a dusk-to-dawn curfew. He recommended that women not come alone.

Among those returning was Jack Rabito, 61, a restaurant-bar owner, who bought his home in 1965, and like Dempsey didn't have flood insurance. "I won't be getting inside today unless I get some scuba gear," he said, waiting with Dempsey for a ride in a boat to get to his home.

At two of New Orleans' damaged levees, engineers continued making repairs that would allow pumps to begin draining the floodwaters. "The water is receding now. We just have a long ways to go," Mike Rogers, a disaster relief coordinator with the Army Corps of Engineers said.

Hundreds of thousands of people already have been evacuated, seeking safety in Texas, Tennessee and other states. With more than 230,000 already in Texas, Gov. Rick Perry ordered emergency officials to begin preparations to airlift some of them to other states that have offered help.

Amid the tragedy, about two dozen people gathered in the French Quarter for the Decadence Parade, an annual Labor Day gay celebration. Matt Menold, 23, a street musician wearing a sombrero and a guitar slung over his back, said: "It's New Orleans, man. We're going to celebrate."