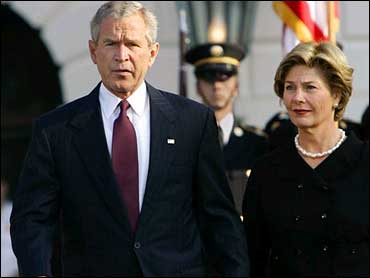 Under a sky as cloudless blue as four years ago, throngs of people on Sunday sang "God Bless America" outside the Pentagon, one of the targets of the Sept. 11 terrorist attacks, and marched in remembrance of the victims and in tribute to troops abroad.

Several thousand people joined in the "America Supports You Freedom Walk," a demonstration organized by the Defense Department that mixed commemoration of the Sept. 11 anniversary with a call to honor those in the armed forces.

Defense Secretary Donald H. Rumsfeld spoke somberly of the stakes in the fight against on terrorism during a wreath-laying ceremony at prestigious Arlington National Cemetery before the walk.

"Today, history is being written by the valiant men and women of America's armed forces and by determined citizens who will do all they can to win this test of wills. For that is what it is to keep our children from experiencing the heartbreak and terror of Sept. 11," Rumsfeld said.

His voice breaking, Rumsfeld noted that the children of some of the 184 victims killed inside the Pentagon, which is the Defense Department headquarters, and aboard hijacked American Airlines Flight 77 on Sept. 11 were in his audience.

"They will likely want to know why this terrible thing happened," he said. "It's hard for free people to comprehend the mix of extremism and hatred that leads terrorists to murder innocent men, women and children. But perhaps we can tell them this: Throughout human history there have been those who seek power through fear and mass murder but eventually all of them, every one has fallen."

In a city more accustomed to protests against government policy, the crowds gathered in praise of soldiers. For many participants, support of President George W. Bush's policy in Iraq was a strong subtext of the day.

Security was tight, and participation in the walk was limited to those who registered before the weekend.

Marchers observed a moment of silence outside the Pentagon and softly sang "God Bless America" before making their way past the now-rebuilt wing of the Defense Department headquarters that was breached by the jet. People saw one old brick embedded in the new construction, charred black from the burning jet fuel and etched with the date of the attack.

Marchers made their way toward the National Mall, site of an afternoon concert by country singer Clint Black.

Gordon England, the acting deputy defense secretary, noted the crystal clear day in remarks outside the Pentagon. "But I also remember four years ago was a beautiful day," he said, "and of course it turned into a very dark and fateful day for the world."

Bush observed a moment of silence at 8:46 a.m., timed with the first hijacked plane's impact at the World Trade Center in New York, in a ceremony on the White House South Lawn.