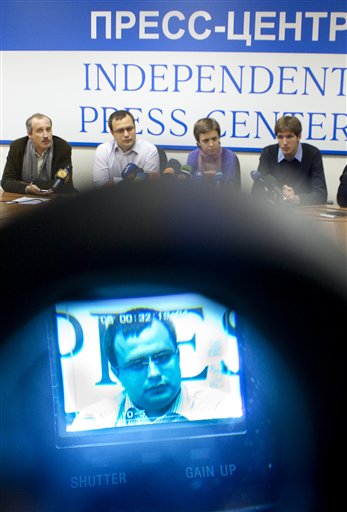 Three years after their mother was gunned down in her Moscow apartment building, Anna Politkovskaya's son and daughter said Tuesday they are losing hope the killers will ever be brought to justice.

Prosecutors are investigating three men accused of helping to set up the journalist's shooting on Oct. 7, 2006, but they have said little about who might have ordered the contract-style killing while the suspected gunman is believed to be hiding abroad.

Politkovskaya's editor at Novaya Gazeta said Tuesday the investigators have new suspects "in their field of vision." Sergei Sokolov, who has worked closely with investigators on the case, refused to identify the new suspects or say how they might have been involved.

Throughout her career, Politkovskaya harshly criticized the Kremlin and exposed widespread rights abuses and corruption in Chechnya, which won her world renown but many enemies at home.

Suspicions arose immediately of possible government involvement in her killing, and the handling of the case so far has done little to dispel them.

Politkovskaya's daughter expressed concern Tuesday about the government's willingness to conduct an honest and full investigation.

"An indication that the Kremlin is interested in the case being solved will come when the real people are put on trial," Vera Politkovskaya told journalists.

"Our family gradually is beginning to lose hope that the whole chain of people who took part in the killing will be found and convicted," she said, sitting with her brother, Ilya Politkovsky.

The three suspects accused of playing minor roles in the killing were acquitted by a Moscow jury in February. The Supreme Court overturned the acquittal and sent the case back to prosecutors, but then last month changed the scope of the investigation at the family's request.

The case against the three defendants was merged with the investigation into the suspected gunman and the search for the mastermind. Sokolov said it was doubtful the mastermind would ever be identified.

Alleged gunman Rustam Makhmudov, the brother of two of the defendants, has fled Russia. Although he has moved from one country to another, Sokolov said, there have been missed opportunities to arrest him. The editor would give no specifics, saying only that Makhmudov's location in a European Union country was known in April.

Ilya Politkovsky said he hopes investigators have been given fresh impetus to find the gunman and mastermind. But as it stands now, the case is only likely to make it back to court in the event Makhmudov is apprehended.

Prosecutors did not respond to a request for information on the status of the investigation.

Since Politkovskaya's death, several other journalists and human rights activists have been killed in Russia _ a trend that has caused alarm in the United States and Europe.

Amnesty International urged Russian President Dmitry Medvedev on Tuesday to take genuine steps to end the attacks and to demonstrate a commitment to bringing perpetrators to justice.

"It is time President Medvedev showed the political will to protect people that stand up for human rights in Russia," Amnesty secretary general Irene Khan said in a statement.

Two representatives of France-based Reporters Without Borders, including the secretary general, were unable to obtain visas to travel to Moscow to join Politkovskaya's children at the news conference. The rights organization said it had been tossed from one Russian government department to another after first applying for the visas on Sept. 25.

A spokesman for the Russian Embassy in Paris, Andrei Kleimyonov, said the Reporters Without Borders representatives had filled out the visa application incorrectly, and he denied any political motivation for the decision, the Interfax news agency reported.