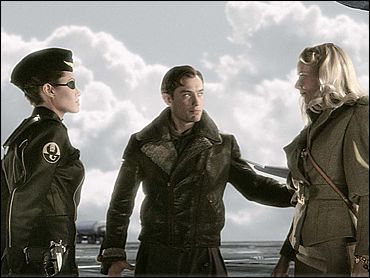 The debut flight of "Sky Captain and the World of Tomorrow" landed the No. 1 weekend box office spot with an estimated $16.2 million amid an overall lackluster turnout at theaters.

The film was originally slated to debut during the summer blockbuster season, but distributor Paramount pushed back the opening amid post-production delays.

"You gotta figure, with a project like this, you don't know what the response is going to be from the audience," said Paul Dergarabedian, president of box office tracker Exhibitor Relations Co. "I think they maximized the potential of the movie by taking it out of the summer and putting it here because it was the only way it was going to be No. 1."

Wayne Lewellen, Paramount's head of distribution, acknowledged the film might have drawn a larger opening audience as a summer release.

"Absolutely. You have a larger audience in summer than in the fall," Lewellen said. "I thought we had a great date in June prior to the opening of ("Spider-Man 2"). Unfortunately, they couldn't deliver the picture."

The film drew a largely older audience, according to studio tracking, which estimated 70 percent of viewers were over 25. About 55 percent of the audience was male, Paramount said.

"Just the look of the picture, the kind of retro look, probably had an appeal to an older audience," Lewellen said, adding that he hopes the film will attract younger audiences in the coming weeks.

Two other debut films broke into the box office top 10.

Mac plays a retired, egotistical baseball star trying to make a comeback. It's the first leading film role for Mac, who stars in his own television show and has played several supporting characters in films like "Ocean's 11" and "Head of State."

"For Bernie Mac it's solid, in the context of the time of year and how the box office has been in a slump," Dergarabedian said.

"It's a pretty normal drop for the genre," said Rory Bruer, president of distribution for Sony Pictures.

"Wimbledon" appealed mostly to female viewers under 30, according to tracking by Universal Pictures.

"It's not a disappointment for us," said Paul Pflug, spokesman for the studio. "It's a movie that opened well, and we believe it will have some playability in the United States."

Overall traffic at movie theaters was down over the weekend. Viewership for the top 10 movies saw a decline of more than 25 percent compared to a year ago, when "Underworld" led the box office, Dergarabedian said.

Estimated ticket sales for Friday through Sunday at North American theaters, according to Exhibitor Relations Co. Inc. are: