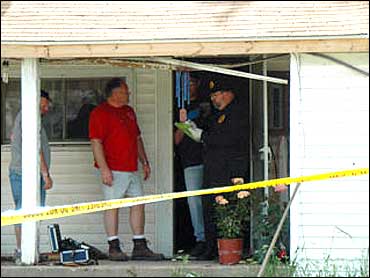 Six people, including two children, were found shot to death Sunday morning in neighboring farmhouses, and investigators believe one of the dead was responsible for the slayings, a sheriff's officer said.

The same family owned both houses on a farm of several hundred acres. Two bodies were found in one farmhouse and four were found in another.

Authorities said the shootings probably happened between 6 and 10 a.m. at the farm west of Bellefontaine, a town of 13,000 people about 45 miles northwest of Columbus.

"I've being doing this for 35 years, and I've never seen anything like this," Logan County Sheriff's Lt. Chuck Stout said.

Investigators believe one of the dead was responsible for the attack, Stout said.

Sharyl and Gary Schafer were found in one farmhouse, while the others were found in a second house about a quarter-mile away, Henry said.

A seventh person, Stacy Moody, 15, was shot in the neck. After being injured, she called a friend who alerted authorities. Moody was flown to Ohio State University Medical Center in Columbus. The sheriff did not know her condition.

Investigators found several guns at the scene, Henry said, including a rifle inside the house where four bodies were discovered. He would not say whether the rifle was the weapon used in the shootings.

Officers had received 10 nuisance calls concerning that house, though the sheriff would not provide details about the complaints.

People drifted in and out of the sheriff's office Sunday afternoon, hugging and crying. One woman nearly collapsed moments after arriving and speaking with people at the office, and deputies had to help her inside.

"Dealing with a small community like this, everyone knows everyone," Henry said.