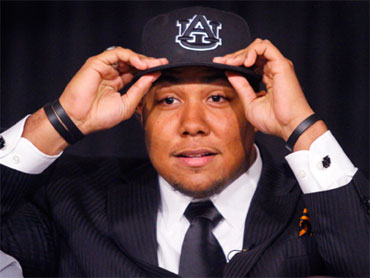 Alabama and Auburn were at it again on national signing day.

The Crimson Tide and Tigers, who have won the last two national championships, each landed recruiting classes the experts adore and went head-to-head for several top prospects — none bigger than offensive tackle Cyrus Kouandjio from DeMatha High School in Maryland.

Rated one of the top-10 recruits in the country by Rivals.com, Scout.com and ESPNU, Kouandjio on Wednesday said he was picking Auburn over Alabama, where his brother, Arie, plays.

But just because a recruit makes an announcement on national television, doesn't mean he's made up his mind. Cyrus Kouandjio did not sign a binding letter of intent with Auburn or Alabama — or for that matter with New Mexico, his odd other finalist — and there is no indication when he will make his decision official.

Seantrel Henderson, the top-rated offensive lineman coming out of high school last year, pulled a similar move, committing to Southern California on television but not signing on the first day of the signing period. He ultimately ended up at Miami.

But what Kouandjio did was different. Henderson wanted to go to USC, but changed his mind when NCAA sanctions hit the Trojans.

"I think Cyrus picked a school that he didn't know he wanted to go to," Rivals.com national recruiting analyst Mike Farrell said.

Another top recruit, linebacker Brent Calloway from Russellville, Ala., first committed to Alabama then switched to Auburn, but ended up signing with Alabama.

"Probably the most interesting story in this year's recruiting derby is Auburn vs. Alabama," Allen Wallace, national recruiting editor for Scout.com and publisher of SuperPrep magazine.

Kouandjio isn't the only five-star recruit who is going to take a few more days to cement his decision.

Maybe the most heralded prospect in the nation, defensive end Jadeveon Clowney, from Rock Hill, S.C., said in an interview with ESPNU he probably won't sign until his birthday, Feb. 14 — Valentine's Day. He said his choices are South Carolina, Clemson and Alabama.

Generally, signing day is about the rich getting richer. The top-rated players tend to flock to the traditional powers. So it was no surprise to see Texas, Florida State, Southern California, LSU, Ohio State and Notre Dame come away with classes highly ranked by the recruiting gurus.

Oregon, fresh off its first appearance in the national title game, also got high marks.

A couple of teams that had mediocre 2010 seasons, Georgia and Clemson, gave their fans reason to believe better days are ahead with classes packed with top prospects.

And in a day full of tiresome what-hat-will-he-pick news conferences at high schools all over the country, running back Isaiah Crowell of Columbus, Ga., might have started a new trend.

After declaring that he was staying close home and going to Georgia, Crowell pulled out a bulldog puppy in a red sweater. No going back on that.

A look around the nation at some of the other top stories of signing day.

Florida State is rolling under Jimbo Fisher. The Seminoles are coming off 10-win season and the first recruiting class Fisher can truly call his own drew rave reviews.

Rivals.com, Scout.com and ESPNU all had Florida State's class rated in the top five in the nation.

Running back James Wilder Jr., son and namesake of the former NFL star who played for Tampa Bay, and defensive back Karlos Williams from Davenport, Fla., were two of the Seminoles' biggest scores.

With new coaches at rivals Florida and Miami, Fisher was able to clean up in state.

"They did most of their damage when Urban Meyer was (at Florida)," Farrell said. "Certainly, they took advantage of a weakened Miami. But they went head-to-head with Urban Meyer and they were winning."

While Meyer spent signing day working as an analyst for ESPNU, his replacement at Florida, Will Muschamp, was securing another top-20 class for the Gators.

New Miami coach Al Golden had lots of catching up to do in a short time when he arrived in Coral Gables, Fla., from Philadelphia, where he had been the coach at Temple. The Hurricanes' class was generally ranked in the 30s nationally.

"There is a sense of accomplishment because we only had about 15 actual days on the road," Golden said.

Nothing, not even NCAA sanctions, can stop Lane Kiffin from racking up on signing day.

The Southern California coach landed one of the highest-rated classes in the nation, despite the fact that his program couldn't play in a bowl game last season and won't be eligible for the postseason in 2011.

The sanctions also stripped USC of 30 scholarships, 10 per season, over three years, but because the Trojans are appealing the penalties handed down by the NCAA for violations involving former star Reggie Bush, they had a full complement of scholarships to work with this year.

"You probably couldn't point to a staff in the United State that deserves more credit than USC's," Wallace said.

Kiffin, who was one of Pete Carroll's top recruiters when he was an assistant at USC, went about trying to replenish a roster that was well under the 85-scholarship limit last season by signing a class this year that was expected to surpass 30 players. Some of them are early enrollees who will count toward last year's class.

"They had to load up now because the future is uncertain," Wallace said.

PUTTING D IN THE DOME

Notre Dame needs to restock a defense that has been short on playmakers in recent years and that's just what coach Brian Kelly tried to do with the first Fighting Irish recruiting class he can truly call his own.

The jewels of Kelly's class, which received a top-15 grade from the experts, were defensive lineman Stephon Tuitt of Monroe Ga., and linebacker Ishaq Williams of New York.

"You can't fake it on defense. You can fake it a little bit on offense. But defensively, you know, you gotta win the one-on-one matchups. You've got to win those matchups," Kelly said.

Rodriguez asked Hoke if players such as Denard Robinson were helpful in recruiting new players and Hoke gave a positive response, praising the players as expected. No problems there.

Next Rodriguez asked Hoke if the upgraded facilities at Michigan helped recruiting. Again, Hoke's response was as expected, touting the greatness of all that is Michigan and finishing with this: "There are no excuses for us not to compete at a high level every time we take the field."