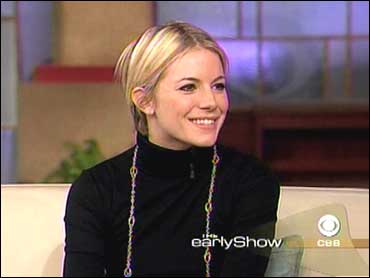 Before heading out for her holiday break, The Early Show co-anchor Hannah Storm had a chance to sit down and talk with actress Sienna Miller about her latest role on the big screen.

Miller got her big break opposite Jude Law in the romantic comedy "Alfie," and now stars with Heath Ledger in the new film "Casanova." But this time her character, Francesca Bruni, is quite immune to the legendary lover's charm.

In the film, Miller plays a fiery, independent woman – the first woman to be a match for Casanova.

"She is a toughie. I can only aspire to be more like her," says Miller. "It was fantastic. She debates, takes on the boys. So it was good. It was really good." Miller says her character is a woman "very much ahead of her time."

Talking about her co-star, Miller says Ledger was "just the nicest, most funny non-egotistical guy. He's great. I was very lucky."

The film was shot on location in Venice, Italy, and Miller says she misses everything from the food down to the daily commute.

"Living in Venice, you get picked up by a boat in the morning as opposed to a car. I miss it like mad," she says. "Amazing pasta. Pasta all day. It was lovely."

"Casanova" is Miller's first big film since "Alfie," where she met her fiancée Jude Law. But their relationship has become fodder for the tabloids, and Law admitted to an affair with a nanny this past summer.

How does she deal with the tabloid attention?

"I can't read them," she says. "I don't know there is any formula or any kind of way to do it. Suppose just don't read it and just try to live as normal a life as possible. People can speculate about your life. You just have to be thick-skinned, I suppose."

Miller says the celebrity magazines try to demystify stars. "There used to be glamour in the film industry. Now they prefer to have a photo of you with half a burger in your mouth or in your pajamas…. I'm not a fan of them, I have to say."

Something she also gets a lot of attention for is being a fashion icon. Miller says she doesn't know where she gets her unique sense of style from and admits that from time to time she had made "horrible" mistakes as well.

"Yes, I have horrible styles, pink and white hair. And beads," referring to a look she was sporting when she was about 17 years old. "I like clothes. I'm a girl and I collect clothes. I love the kind of history behind who has worn them before."