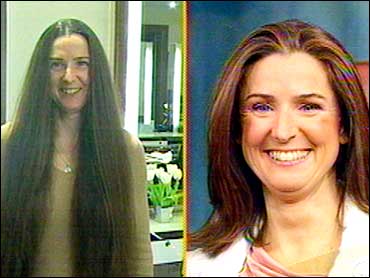 But one of the best reasons of all might be to cut it off so you can donate it to Locks Of Love, an organization that uses donated hair for wigs for cancer patients.

On The Early Show's Monday Makeover, stylist David Evangelista was at a New York hair salon to meet Jane Lundy, one of The Early Show viewers, who has not had a haircut in about three decades. She wrote to the show, asking for a makeover and said if she got one, she would donate her hair to Locks Of Love.

Once Evangelista cut her hair, colorist Parvin Klein put some highlights in Lundy's untouched hair to cover some gray and makeup artist Julie Clevering transformed her face. Lundy also got an outfit to show off her marathon-runner's body. (Lundy has run in several marathons, including the 2002 Boston Marathon, which she finished in just over 3 hours).

About her new look, Lundy says, "I feel great. It's so light and wonderful."

Evangelista explains, "We had these really sun-kissed highlights. She's a runner. So we want to keep it low maintenance. With that, we achieved it. Took off a good, eight, ten inches."

The reason Lundy says she kept growing her hair was because she didn't think she could do it herself. "It kept growing and growing. I always threw it in a braid."

Now, she says she will be able to run faster after losing some weight off her head. "Better watch out," she says happily.

Lundy got a Certificate of Appreciation from Madonna Coffman, president of Locks of Love, thanking her for the donation of her hair to the organization.