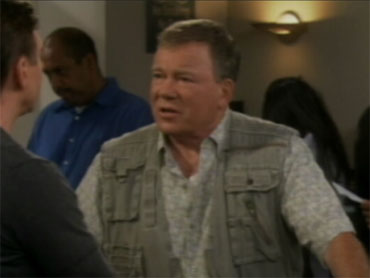 "$#*! My Dad Says" began as a Twitter feed -- a son tweeting about his father's colorful and caustic views on life. In May, the tweets became a book that's been a best-seller ever since.

In his latest role, Shatner plays a father prone to sharing his politcally incorrect observations, in the new CBS sitcom, "$#*! My Dad Says."

"What it means is wise and unwise stuff my father said. And it's a relationship show," Shatner explains.

The seventy-nine-year-old actor is still traveling at warp speed, as O'Dell learned when she caught up with him at L.A.'s Equestran Center. He juggles a busy career with his life's other passion, showing horses.

"Yeah, I don't think an Oscar or an Emmy would mean as much ... after all these years," he said.

With mulitple Emmys and a Golden Globe to his credit, Shatner doesn't have much left to prove, but he was drawn to the premise of "$#*! My Dad Says," and found a kindred spirit in his character, Ed Goodson.

"He's somebody who doesn't have a filter, you know, between his brain and his mouth. Was that kind of refreshing?" O'Dell asked.

"Yeah. It struck me that that's exactly the key to the character. He's just saying whatever comes into his head. It's just what he does," Shatner replied.

Would the actor like to be able to do that in real life?

"I pretty much do!" he laughed.

Adding to the excitement, the veteran actor is shooting in front of a live audience for the first time.

"Is it more invigorating though? I would imagine when you walk out, they go absolutely crazy," O'Donell said.

"They see it happening. And there's ... an explosion when they see the perfection and groans when they see you screw up," he said.

So which is more difficult, learning those patterns or learning your lines?

"The difficulty in learning lines and the difficulty of remembering the pattern all have the same bases of hysteria. And that is, if you forget something, you think, 'Oh my God. Have I gotten too old to remember?"' he said. "That fear hits you."

With the energy of a man half his age, Shatner remains timeless. He's even got his own Twitter page.

"If Twitter had been around when your kids were growing up and they were allowed to blog about you, what kinds of things do you think we would've been reading?" O'Dell asked.

"I'm under the illusion that I'm a great dad, and we have a great lot of fun," he said.

"I'll bet you if I were interviewing them they would say that too," O'Dell said.

"I'd would like to think so, But do they really mean it!?!" Shatner laughed.