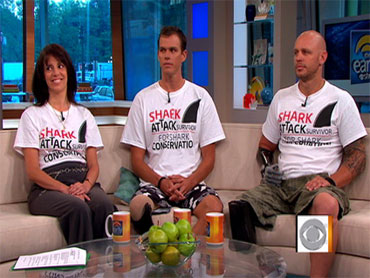 You might think survivors of shark attacks would do anything in the world to not see a shark again. But, in fact, some hope to see many more sharks in the world's waters.

On "The Early Show," co-anchor Harry Smith pointed out that, for many people, the word shark conjures up images of fierce killers.

But in most cases, sharks are actually the victims.

Pictures: Swimming with the Sharks

More than 73 million sharks are killed by hunters each year, mainly for their valuable fins -- often used to make shark fin soup. Scientists now estimate that 30 percent of shark species are close to extinction.

It's no surprise that conservation groups are concerned, and some unlikely advocates have emerged.

Paul de Gelder, a diver for the Australian Navy, was attacked by a bull shark in Sydney Harbor last year. He lost his right hand and his lower right leg.

Debbie Salamone, a journalist and dancer, was swimming off Cape Canaveral in 2004 when a shark bit her foot, severing her Achilles tendon.

And in 1997, Michael Coots lost part of his right leg to a shark while surfing off the Hawaiian island of Kauai.

De Gelder, Salamone and Coots, along with seven other shark attack survivors, will advocate on behalf of their would-be killers at the United Nations today.

Salamone said their stories are the "ultimate" in irony and forgiveness.

She said, "When you think about these statistics, it's very frightening for the health of our oceans. And so we need to end finning. We need to halt the fishing for these threatened and near-threatened species. And we need countries to come up with good global shark conservation plans to have some limits on shark fishing. Because there are no limits right now."

Coots, who lost his leg, said he joined the cause because he thought he could do something positive.

He said, "(I felt) like I could open up doors with my story. And why not?"
De Gelder said he decided to advocate for sharks because he says, "It's a respect thing. It's not a fear thing."

He added, "(When I was contacted to help this cause) it was a humbling experience because I do a little bit of work in Australia. But to be able to come over here on a worldwide scale, go to the U.N. and work with these wonderful people, that's amazing. You try and make a difference worldwide."

Salamone said after her attack and long rehabilitation, she wanted her revenge against sharks.

"I really didn't know the plight of sharks too much. ... I wanted to eat shark steaks. I was not happy. Eventually, though, I saw it as a test of my commitment to environment conservation and joined the Pew Environment Group."

These advocates are working to end a process known as "finning," in which a shark's fin is sliced off and the rest of the animal is discarded.

Salamone explained, "(They) dump the animal sometimes still alive back into the water where it drowns or bleeds to death. And fishermen can fetch up to $300 per pound for these fins, which are used mainly as a soup ingredient in Asian markets. We're hunting some of these species to extinction which is very bad for the ocean ecosystem because we need sharks as a top predator to keep the food chain in check."