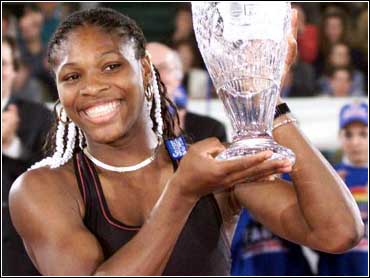 The top-seeded Williams needed 46 minutes to win the sixth title of her career. Chladkova, a Czech ranked 56th in the world, was playing in her first final of a significant tournament.

Williams, ranked No. 4 in the world, had a far harder time Saturday during her semifinal against Amelie Mauresmo . She needed three sets to defeat the 14th-ranked Frenchwoman.

"I was really pushed to the limit yesterday against Amelie, and today that left me really sharp," Williams said. "I think Denisa was a little nervous and tired out there today, but I have to give her credit for getting to the final."

Williams broke Chladkova five times and won most of her own service games at love. At times, the crowd began clapping loudly for Chladkova, hoping the 21-year-old Czech could make the match competitive.

"I didn't have such a great day, but she played excellently," Chladkova said. "But it was a success getting to the final. It will improve my confidence and ranking."

Chladkova, whose only other final came at Knokke-Heist, will move up to No. 40 in the rankings after starting 1999 at No. 134.

Williams became the eighth different winner in eight women's tournaments this season. She earned $87,000 for the victory after breaking $3 million in career earnings last week.

The 18-year-old American took a tennis break from October to mid-January to attend design school in Florida.

This was her third tournament since the layoff. She reached the fourth round of the Australian Open and the finals last week in Paris. In that match, she was hobbled by a knee injury in a loss to Nathalie Tauziat.

"I'm pretty happy to my start in 2000," the U.S. Open champion said. "I definitely plan to play more tournaments this year and improve my ranking."