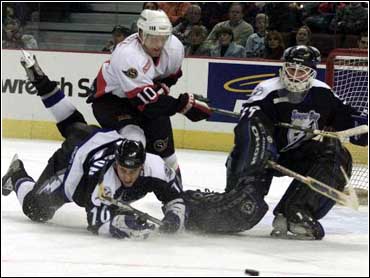 The Ottawa Senators moved closer to meeting owner Rod Bryden's goals at the box office and closer to the top of the Northeast Division.

Shawn McEachern, Wade Redden and Grant Ledyard each had a goal and an assist Thursday night as the Ottawa Senators won their third straight at home, 6-2 over the Tampa Bay Lightning.

Earlier in the day, the Senators announced its season-ticket drive, which Bryden said is crucial to keeping the franchise at Ottawa, had almost met its target totals of 90 percent renewal and 1,500 new full-season equivalents.

The Senators, only three points behind division-leading Toronto, built a 4-0 lead by the middle of the second period and coasted to victory in front of a crowd of 16,214.

"We had a good forecheck, the forwards were coming back hard, and the defense was standing up," said McEachern, whose goal was his team-leading 22nd. "It's great when everybody gets involved and gets scoring."

Marian Hossa, Joe Juneau and Rob Zamuner also scored for Ottawa, unbeaten in its last five at home (4-0-1). Vaclav Prospal assisted on McEachern's goal to extend his point-scoring streak to six games. He has five goals and two assists in the stretch.

"Every point is so valuable in trying to catch Toronto," said Zamuner, who broke a 10-game goal drought with his third-period score. "Every game is big for us."

Vincent Lecavalier and Fredrik Modin had the goals for the Lightning, winless in their last seven (0-4-1-2).

Tampa Bay hasn't won since beating the expansion Atlanta Thrashers on Jan. 29 and the Lightning are winless in 16 road games since a win over Anaheim on Dec. 1.

Ottawa's power play contributed to the win, with two goals on seven attempts. Tampa Bay finished 0-for-3 with the man-advantage.

"It seems like everything is not going right," Lightning defenseman Jassen Cullimore said. "We pride ourselves on working hard. We can usually kill four or five penalties in a game, but once we get over that, we usually give up a couple."

Ron Tugnutt made 17 saves to earn his 15th win.

Hossa opened the scoring just 1:16 in, after he stripped Lightning defenseman Bryan Muir of the puck at the right faceoff circle. His quick shot beat Cloutier for his 21st goal.

After McEachern set up Juneau at 8:12 to make it 2-0, he added his team-leading 22nd goal on the power play just 25 seconds into the second.

Ledyard scored after intercepting a clearing attempt at the Lightning blue line and blasting a slap shot past Cloutier, who was then pulled.

Lecavalier scored at 14:38 to cut the lead to 4-1, but Redden restored the four-goal advantage with another power-play goal with 1:27 left in the second.