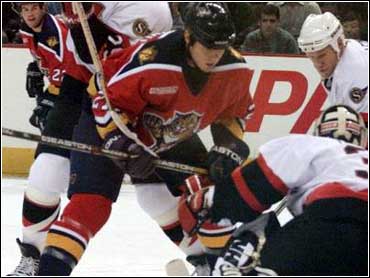 The Ottawa Senators waited until the third period to get its offense on track.

Jason York, Radek Bonk and Shawn McEachern scored in a span of less than three minutes in the third period as the Ottawa Senators rallied to beat the Florida Panthers 5-3 Friday night.

"I thought we deserved to win," Senators coach Jacques Martin said. "We worked hard and showed a lot of character at the end.".

The Senators erased a 3-2 deficit as York, Bonk and McEachern scored in a span of 2:49. Daniel Alfredsson and Chris Phillips also scored, and Joe Juneau added two assists in Ottawa's first game since the All-Star break.

Pavel Bure had a goal and an assist, and Lance Pitlick and Rob Niedermayer also scored for the Panthers.

"It was tough to lose that way," Panthers right wing Scott Mellanby said. "It was a pretty good effort. We just have to continue to learn. We have to make better team decisions with a one-goal lead."

Florida took a 3-2 lead on third-period goals by Niedermayer and Bure, but a bad clearing attempt during a line change by defenseman Dan Boyle proved costly. The mistake allowed York to skate i alone and beat Mike Vernon with a high wrist shot at 14:21 to start the Senators' comeback.

"I guess he was just trying to flip it over to the open man and get off the ice. It was a costly mistake," Panthers coach Terry Murray said.

"Every once in a while, I get the cement shoes off," said York, who has five goals this season. "I was surprised. I blocked the puck and got a breakaway."

Bonk's centering pass deflected off the skate of Pitlick at 16:32, and McEachern added his 20th of the season at 17:10 as Ottawa won for just the third time in their last 10 (3-4-3) to climb within six points of Toronto for the Northeast Division lead.

"The break was good for us; we recharged," Bonk said. "It was a good play by Marian (Hossa). I went past the defense and he gave me the pass. It was kind of a lucky goal."

Ron Tugnutt made 21 saves for the Senators, while Vernon stopped 22 shots in the loss.

Florida center Viktor Kozlov, who extended his point streak to four games, has five assists in his last three.

Ottawa forward Rob Zamuner returned to the lineup after missing 20 games with a knee injury.

Earlier in the day, Senators owner Rod Bryden extended his self-imposed deadline to increase season ticket sales and keep the team in Ottawa. The new deadline is Feb. 22.

Bryden had hoped by Friday to have the Senators sell 1,500 new season tickets and have 90 percent of present holders renew their subscriptions for next year.