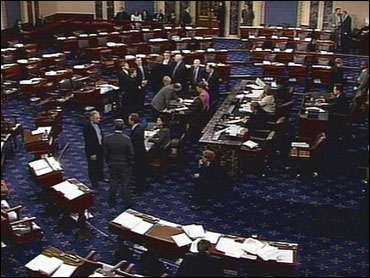 This column was written by Sen. Jon Kyl, R-Ariz..


11 P.M., July 17, U.S. Capitol — With great fanfare, Democrat leaders announced this morning that they would keep the Senate in session through the night to debate the latest version of a previously rejected Iraq withdrawal amendment. I suspected this latest maneuver was merely an effort to appease the anti-war far left even before a Democrat leadership aide freely admitted to the media that the all-night debate was indeed, in the Democrats' words, a "political stunt."

So the greatest deliberative body in the world, during wartime, is being used as a stage for political theater designed to benefit a political party at the expense of a nation's war efforts. What's really going on here? Democrats claim Republicans are obstructing a vote on the Levin-Reed withdrawal amendment. That's not true.

In fact, Republicans have said throughout the day we are ready to vote immediately with the same 60-vote threshold that Senator Reid has more than once acknowledged is standard on issues of great national importance like war funding. Democrats, not Republicans, are the ones obstructing a vote on this amendment by dragging out debate all night to make a political point.

What Democrats are really upset about is that they can't win the amendment. Here's why: First, this amendment would declare General Petraeus' mission over and done just three weeks after the full troop force sent to carry out that mission had arrived in Iraq — and despite signs of progress even at this early stage in the counteroffensive. The same Democrats who voted to confirm General Petraeus and asked for a September progress report on the war in Iraq are now refusing to wait for that report regardless of the results. In fact, some have said that they don't care what is reported in September; the war is not winnable.

Second, not one of the Democrat amendments being considered by the Senate takes into account the dangers of withdrawing our troops too quickly. Yesterday, U.N. Secretary General Ban Ki Moon issued a stark warning that "any abrupt withdrawal or decision may lead to further deterioration of the situation in Iraq."

Withdrawing our troops from Iraq too quickly would hand terrorists a base of operations, endanger the lives of tens of thousands of innocent civilians, and likely plunge the country into civil war, to say nothing of the danger a terrorist victory would pose to our own security. A precipitate withdrawal could lead to chaos and genocide. Who would be responsible for that loss of life? Certainly the United States would bear some blame if we abandoned the fight now. Yet, despite the serious nature of this question, Democrat leaders have refused to provide a response.

The Democrats' withdrawal amendments simply ignore these problems as well as the advice of our generals, who have emphasized that they need time for the surge to work. Major General Rick Lynch, who commands Coalition forces south of Baghdad, recently stated that withdrawing from Iraq before Iraqis are ready to take over their own security would leave Iraq "a mess." The general noted that a precipitate withdrawal from Iraq would "find the enemy regaining ground, reestablishing sanctuary, building more IEDs, carrying those IEDs into Baghdad and the violence would escalate."

Until Democrats can assure the American people that their plan to withdraw from Iraq does not embolden terrorists or plunge Iraq into civil war, they will not win on amendments that result in a premature and ill-planned withdrawal.