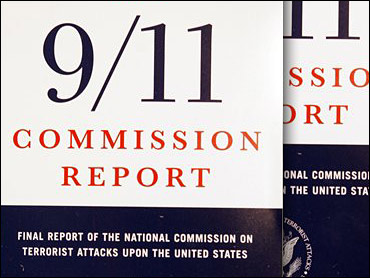 A Senate panel that planned to begin hearings next week on the intelligence overhaul recommended by the Sept. 11 commission will instead hold its first session on Friday.

The Senate hearing is all but certain to be Congress' first on the commission report. Several other House and Senate committees are also planning hearings, underscoring the sense of urgency congressional leaders are trying to project at a time when lawmakers have just started a six-week recess.

John Kerry, speaking before the USS Wisconsin on Tuesday, urged Congress to do its part and act swiftly when legislation or funding is needed.

"Now that the 9/11 commission has done its job, we need to do our job," Kerry said. "We understand the threat. We have a blueprint for action. We have the strength as a nation to do what has to be done. The only thing we don't have is time. We need to do it now."

Kerry said he will fight a more effective war on terror than President Bush, and he encouraged the Sept. 11 commission to keep working to ensure its proposed reforms are adopted.

With the two candidates determined to project a proactive image on the commission's work, President Bush has assembled a task force to review the 10-member panel's work. Kerry said he should implement the five-day-old proposals immediately, and that the commission should be extended another 18 months.

"Backpedaling and going slow is something that America can't afford," Kerry said at a morning rally in Norfolk, Va. "It will take real, bipartisan leadership and real action to protect this country of ours. You can't treat the commission's report as something that you hope will go away."

Kerry said President Bush could immediately implement many of the commission's recommendations by executive order.

White House spokeswoman Claire Buchan has said President Bush could act within days on the report.

Bush campaign spokesman Steve Schmidt said, "Kerry is using this report as a political opportunity. The president has directed his staff to quickly determine how and when he can act on the recommendations, and his leadership on this issue highlights the difference between making campaign statements and making decisions to lead the country."

The commission's recommendations included creating a new intelligence center and Cabinet-level intelligence director. An intelligence-gathering center would bring a unified command to the more than dozen agencies that now collect and analyze intelligence.

Kerry said the commission should issue progress reports every six months, beginning in December. Among the questions they should address, Kerry said, are whether we are doing enough to strengthen homeland security, reorganize intelligence agencies, build global alliances and make America as safe as it can be.

In Boston, Kerry foreign policy adviser Jamie Ruben told reporters that keeping the commission intact would be an effective way to "bird-dog the bureaucracy" on implementing the panel's recommendations.

Kerry is not scheduled to arrive in the convention city of Boston until Wednesday, when he and several of his former Navy crewmates from the Vietnam War will take a boat across the harbor to the Charlestown Navy Yard.

He made one final campaign stop in Philadelphia Tuesday night for a rally with thousands of supporters behind the Philadelphia Art Museum, on top of the steps that Sylvester Stallone famously climbed in "Rocky."

The bipartisan Sept. 11 commission issued its final report Thursday. Under legislation that President Bush signed in March, the commission is to formally dissolve Aug. 26.

"He hoped there would be some way to continue to speak out and take our case to Congress and the American public," Felzenberg said Tuesday.