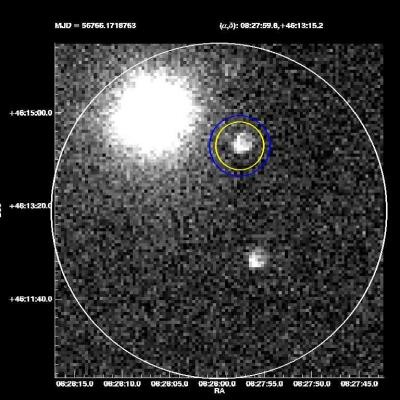 It took billions of years for the light of this cosmic explosion to reach Earth, and now it's offering scientists a rare glimpse of the universe at one of its earliest stages.

A McDonald Observatory telescope in Fort Davis, Texas captured the image of a gamma-ray burst -- the enormous explosion of a star, which took place more than 12 billion years ago, shortly after the Big Bang.

"Gamma-ray bursts are the most powerful explosions in the universe since the Big Bang. These bursts release more energy in 10 seconds than our Earth's sun during its entire expected lifespan of 10 billion years," said Farley Ferrante, a graduate student at Southern Methodist University's Department of Physics, who monitored the explosion along with two astronomers in Turkey and Hawaii.

The phenomenon is not well understood by astronomers, but it is believed to be the result of a catastrophic collapse of a star at the end of its life.

"Gamma-ray bursts may be particularly massive cousins to supernovae... By studying them, we learn about supernovae," said Robert Kehoe, physics professor and leader of the SMU astronomy team.

The photo was snapped in mid-April and released this week.

Among all lights in the electromagnetic spectrum, gamma rays have the shortest wavelengths and are visible only using special detectors.

Armed with images of the burst, astronomers can now analyze the data in order to understand more about the structure of the universe at its infancy.

"At the time of this gamma-ray burst's explosion, the universe looked vastly different than it does now," Kehoe said.

"It was an early stage of galaxy formation. There weren't heavy elements to make Earth-like planets. So this is a glimpse at the early universe. "

Small margins: How half a degree in global warming may affect the world
Thanks for reading CBS NEWS.
Create your free account or log in
for more features.
View CBS News In
CBS News App Open
Chrome Safari Continue
Be the first to know
Get browser notifications for breaking news, live events, and exclusive reporting.