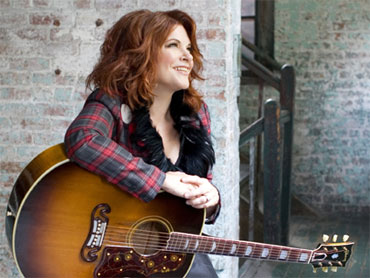 For acclaimed singer-songwriter, Rosanne Cash - when compared to her father, the legendary Johnny Cash - the apple doesn't fall from the tree.

Music is in her blood and the ability to soothe the soul and mend an aching heart is an inherited craft.

Rosanne doesn't need a famous last name to get a seal of approval from her fans, however. Instead, she has made a name for herself by becoming a Grammy award winner with eleven No. 1 singles.

She also made the transition from songwriter to author with the release of her long-awaited memoir, "Composed" (Viking). The memoir gives a candid look into her life and childhood and touches upon her father's struggle with drugs as well as his relationship with her mother.

Despite her tumultuous past coping with her father's addictions, Cash is on a roll with her music career. Earlier this month she accepted the award for "Album of the Year" for her most recent recording "The List" at the 2010 Americana Honors & Awards Show.

"The List," released last year, was inspired from a day in 1973 on tour with her father. She joined his road show after high school graduation at the young age of 18.

What happened when she told her dad - the iconic Johnny Cash - that she didn't know several of his favorite songs?

"He spent the rest of the afternoon making a list on a yellow legal pad, I could still see him doing it, very pensive, think very thoughtfully about each song, and on the top he wrote 'One Hundred Essential Country Songs' and at the end he gave me the list and said this is your education," Cash said on her official website.

Cash stopped by The Early Show on Saturday's "Second Cup Cafe" to perform her Grammy-nominated song "Sea of Heartbreak."

Cash is the eldest child of Johnny Cash and his first wife, Vivian Liberto, She was born in Memphis, Tennessee on May 24, 1955, a month before her dad's first single, "Cry, Cry, Cry."

She has five children, and currently lives in New York City with her husband, producer and guitarist, John Leventhal.