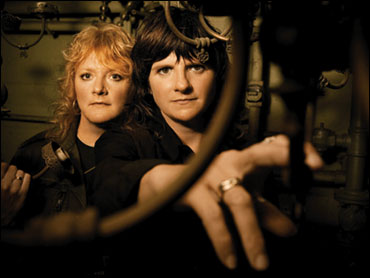 The Indigo Girls have accomplished a lot in their career: A Grammy, 11 major studio albums, and more than two decades' worth of singing beautiful harmonies capturing the hearts of fans all over the world.

But recently, they added one more achievement to their list - a holiday album.

"Holly Happy Days" hit shelves not too long ago - a collection of classic and original holiday songs.

Amy Ray and Emily Saliers joined "The Early Show on Saturday Morning"'s "Second Cup Cafe" alongside country singer-songwriter Chely Wright to perform "It Really Is a Wonderful Life," as well as "The Wonder Song."

Why did the dynamic duo decide to change things up and make a holiday album after two decades?

"Before, we just felt like there are so many great holiday records already," Ray told Spinner. "We have a lot of respect for that genre because there have been some great ones in the past, but we just felt like, 'OK, we can do this. We'll just try to do what we do and pick the songs we like.'"

And that is just what they did - the album features their versions of classics like "Oh Holy Night" and "I'll Be Home for Christmas," a cover of Woody Guthrie's "Happy Joyous Hanukah," as well as three new original songs, "Your Holiday Song," "Mistletoe" and "The Wonder Song."

The Indigo Girls added a little country twang with the help of country music star Chely Wright in "It Really Is A Wonderful Life." Wright, a soloist, is best known for her No. 1 hit in 1999 "Single White Female."

She joined Second Cup Cafe earlier this year after she shocked the world with the announcement she was gay, becoming the first openly gay country singer. She released a memoir, "Like Me," which she says at one point her double life left her suicidal, until she finally found the strength to face the music.

The Indigo Girls have had quite a journey themselves. The harmonious pair met in elementary school in Georgia and first sang together in chorus in 1985 to James Taylor's "A Junkie's Lament."

After they fine-tuned their music through the years, the duo signed with Epic Records in 1988, they released their critically acclaimed eponymous album to thunderous praise; it remained on the Billboard Hot 100 Chart for 35 weeks, earned double platinum status, received a Grammy nomination for "Best New Artist" and won "Best Contemporary Folk Recording."

Not only do the Indigo Girls sing about love, humanity and doing things for the greater good - they act on it through philanthropy.

In 1991, Ray and Saliers co-founded the non-profit organization Honor the Earth to raise awareness and financial support for indigenous environmental justice. They are also longtime supporters of groups fighting for women's rights, civil rights for same-sex couples, and the abolition of the death penalty as well as voter registration.