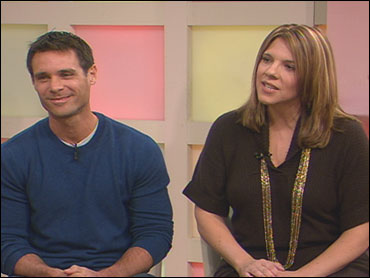 Thursday night's "Star Search" winners, John Roy and Rebecca Valadez took the Red Eye together to be on Friday's The Early Show , but it was not the first time they had spent time together.

"We hung out," says Roy who is originally from Chicago. "The first time we met we were just hanging around the hotel. I'm like, 'We're on Star Search. We should go and do something.' It was weird."

Valadez adds, "You've got Hollywood at your feet, just a block away. We're like, let's go walk down Hollywood."

"No," they say, though that would be another kind of reality show. "Just two people on a TV show," Roy says.

It was a photo finish win for comic Roy, who uses racial issues in his routine.

He drew his biggest "Star Search" laughter when he joked, "Who's the scariest guy in prison? The white guy. Why? Because he is guilty. Black prisoner might have been framed, Latino might have not had lawyer. The white prisoner did it."

In the adult singer category, Valadez got a near-perfect score from the studio judges and the nation's Internet voters (38 of a possible 40 points) and a standing ovation from the audience.

Valadez says she had once considered giving up singing altogether.

"I have been performing for years, but I kind of was, like, retired for the past three years. I haven't really done anything. Getting up on that stage was like a revelation for me," she says. "Coming out of retirement - It was a life-altering situation. I wasn't sure what to expect. I'm glad that it came out the way I was dreaming it would."

Why did she want to quit?

"Because there's lots of pressure, in the media, with all the record labels. I was trying to get a record deal to, be thin," she says.

During the show she joked about being overweight, and in an interview Friday says that even when she was thin, a size 2, label executives were still asking her to lose weight.

"It didn't make any sense to me," she says. "I was spending so much time on my image and wasn't spending the time on my music. When you're trying to alter your image, the music automatically begins to be altered. You have to match, I guess. So I really wanted to do something that I liked and being some sort of diva dance pop girl wasn't what I was interested in," she says.

Back then, she was in her teen years, the time when Britney Spears and Christina Aguilera were coming out.

"I like to dance but I'm more of, like, a jazz R & B singer. I really take it seriously. I would rather put on a live performance than just dancing around," she says.

Roy says there is a lot of "pressure in comedy to be a Britney Spears type diva, too. I really had to resist that and go for what I wanted to tell. I just feel that I'm getting my viewpoint across. If people find that edgy, I don't know, maybe they should think about why they find it edgy. I just think I'm trying to say things that I see in the world behind me and put it across, like some of my comedy heroes - like Richard Pryor and Bill Cosby."

His inspiration comes from having gone to a high school that was 50 percent black and 50 percent white. And while his racial jokes got him lots of laughs at "Star Search," not every one finds them funny.

"It's interesting that the African-American audience has never been tense on those jokes," he says. "It's always the white audiences that don't know, is it OK to laugh. Or maybe they might have some of the viewpoints that I'm trying to poke fun at."

On Thursday night, he was trailing with studio judges and the Internet voters put him in first place.

"It was very cool to watch that, watch the numbers switch," he says.