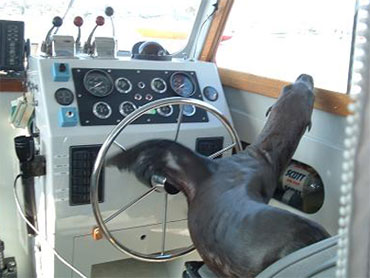 An adventurous sea lion took a patrol fireboat for a ride.

According to the Orange County Sheriff's Department Blog, two deputies were returning to Marine Operations Headquarters after responding to a call when the pair had to make an unruly sea lion a passenger.

The stubborn sea lion, which would not stay in the water, was approaching people on the dock, according to the blog.

As deputies headed back to the Marine Operations Headquarters, the boat's equipment started turning on and off, the blog stated. Much to their surprise, they saw a sea lion in the driver's seat of the cabin.

The fireboat returned to the Marine Operations Headquarters safely, despite failed attempts to get the sea lion away.

The sea lion finally wobbled off the boat and went back into the water.

Burst pipeline causes "eye of fire" in Gulf of Mexico

To read the full story, log onto the OC Sheriff Blog.