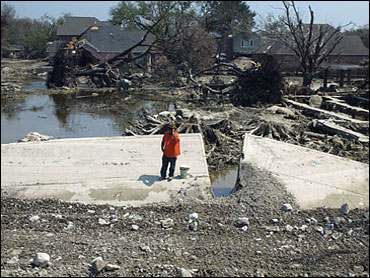 As rain from Hurricane Rita threatened to once again flood the city, residents were forced to decide yet again whether to stay or go. The Army Corps of Engineers was racing to patch New Orleans' fractured levee system.

Forecasters said the storm that swiped Florida on Tuesday could strengthen to a Category 4 and hit Texas by the end of the week. But a slight turn to the right was possible and engineers feared additional rain could swamp the city's levees.

The Army Corps of Engineers said New Orleans levees can only handle up to 6 inches of rain and a storm surge of 10 to 12 feet. Early Wednesday, Rita was a Category 3 storm with 115 mph winds.

Mayor Ray Nagin estimated that 400 to 500 residents were left in the city. The city plans to start to re-enforce the evacuation order Wednesday, he said. He did not give specifics on how the order will be enforced.

CBS News Correspondent Cami McCormick reports hundreds of buses are standing by to evacuate people, enough food and water for 500,000 people has been brought in by the military, and a field hospital has been set up at the Convention Center, where so many people were left with nothing during Hurricane Katrina.

"We are praying that the hurricane dissipates or that it weakens," said Gov. Kathleen Blanco, who declared a state of emergency. "This state can barely stand what happened to it."

In anticipation of another hurricane, the Corps drove a massive metal barrier across the 17th Street Canal bed to prevent a storm surge from Lake Pontchartrain from swamping New Orleans again.

Fearing another levee break, some National Guard units have pulled out of the city, reports Pinkston.

Government engineers and private contractors also worked around the clock across New Orleans to repair the damage to the system of pumps, concrete floodwalls, earthen berms and canals that protect the below-sea-level city.

"We've seen Rita coming, of course, for the past couple of days and we've known it's going to be headed to the Gulf Coast," said Homeland Security Secretary Michael Chertoff on CBS News' The Early Show. "Ever since Katrina, we've been reloading — reloading our resources, getting more food and water precisely to anticipate the possibility of another storm."

President Bush returned to the hurricane zone Tuesday, his fifth trip to the region since Katrina destroyed the Gulf Coast.

"I want the people to know that there's progress being made in this part of the world," the president said.

"It's correct that the city is basically dry. Almost all of the water is back in the canals," Army Corps of Engineers emergency manager Joey Wagner told CBS News. "We continue to repair damages to Grand Isle, the barrier island, in preparation for Rita. But as far as I know, the city is pretty much completely dry."

There are new questions about the city's flood-protection system. While the Army Corps has said flooding resulted because Katrina's storm surge exceeded what the barriers were designed to protect, investigations by The Washington Post and The New York Times on Wednesday quoted experts saying faulty design and inadequate construction played more of a factor.

Meteorologists also have questioned whether New Orleans got the full brunt of Katrina's Category 4 power, as the Corps has maintained. Both newspapers cited researchers arguing that storm surges didn't cascade over the floodwalls.

"New Orleans presents certain challenges that are unlike those presented in Texas, because the geographic configuration of the city is a bowl and it's essentially cut off except for a few highways," Chertoff told Early Show co-anchor Harry Smith.

"One of the things we are in the process of doing and will continue to do is look back and see what things worked well and what things didn't work well," he added.

When he returned to this battered city in the wake of Hurricane Katrina, Darryl Robichaux dragged his plants and patio furniture back onto his balcony. Three days later, another hurricane and a new evacuation order had him pulling them back inside.

"It's pretty sad. We came home to find out half the neighborhood burned down, now we have to leave again," Robichaux, 25, said Tuesday of the fires spawned by Katrina. "No telling what we'll find when we finally get back again."

The process of recovering bodies and searching for survivors continued Tuesday. In one house in the Mid-City neighborhood, officials found both.

Rescue workers said John and Leola Lyons, both 72, stayed together through Katrina's howling winds and floods that filled their one-story house with 18 inches of water. Even after she died, he stayed.

Federal agents finally broke down the door and found John Lyons and his wife's remains, three weeks and a day after the storm.