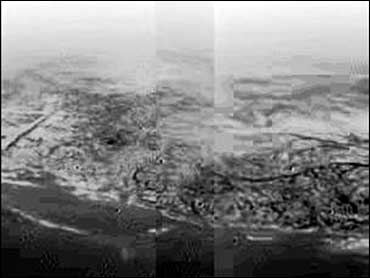 New, refined pictures from Saturn's moon Titan released Saturday show a pale orange surface covered by a thin haze of methane and what appears to be a methane sea complete with islands and a mist-shrouded coastline.

Space officials worked through the night to sharpen the new photos taken by the space probe Huygens, which snapped the images Friday as it plunged through Titan's atmosphere before landing by parachute on the surface.

Many scientists at the European Space Agency center in Darmstadt, Germany, looked tired from their overnight work but were still clearly elated about the successful arrival of data from Huygens the day before — a major triumph for the European space program.

"The instruments performed brilliantly," said John Zarnecki, in charge of the surface instruments. "We can't find a single missing data frame. The link and the quality of the data was absolutely superb."

Officials played back sound gathered from Huygens' microphone at the surface — a whooshing noise they did not identify. But the center of attention was the pictures.

One shot taken from an altitude of 10 miles showed dark lines that suggested stream beds carved by liquid flowing into a dark area suspected to be a sea of liquid methane — with light areas in the dark that could be islands.

"It is almost impossible to resist speculating that the flat dark material is some kind of drainage channel, that we are seeing some kind of a shoreline," said scientist Marty Tomasko from the University of Arizona, head of the camera team. "We still don't know if it has liquid in it."

Titan's notorious haze — which has kept astronomers from getting a better picture through telescopes — is obvious in the two refined images shown Saturday.

An image taken on the surface shows chunks of what scientists say looks like water ice scattered over an orange surface overcast by methane haze. On Friday, the chunks were described as boulder-sized, but overnight examination showed they are much smaller and simply look big because they are close to Huygens' camera.

Deep shadows and depressions around the chunks suggest they could have been surrounded by liquid at one time, scientists said.

Titan is the only moon in the solar system known to have a significant atmosphere. Rich in nitrogen and containing about 6 percent methane, its atmosphere is believed to be 1 1/2 times thicker than Earth's.

Shushiel Atreya, part of the group studying the atmosphere, said the instruments revealed "a dense cloud or thick haze approximately 11-12 miles from the surface."

"Presumably there is a reservoir of methane on the surface," Atreya said.

The surface itself appears to be "material which might have a thin crust followed by a region of relative uniform consistency," Zarnecki said. "The closest analogues are wet sand or clay."

The $3.3 billion Cassini-Huygens mission to explore Saturn and its moons was launched in 1997 from Cape Canaveral, Fla., in a joint effort by NASA, the ESA and the Italian space agency. Huygens was spun off from the Cassini mother ship Dec. 24.

Titan is the first moon other than the Earth's to be explored. Scientists believe its atmosphere is similar to that of early Earth's and studying it could provide clues to how life arose on our planet.

Given Titan's chemical constituents, low temperatures and high surface pressures, theorists predict hydrocarbon rain and, possibly, lakes or streams of ethane and related compounds on the surface, according to CBS News Space Consultant Bill Harwood.. Or, perhaps, some sort of hydrocarbon sludge.

The heart of Huygens' mission was its 2 1/2 hour parachute descent, during which it also sampled the atmosphere and deployed a microphone to gather sounds.

Scientists want to know whether Titan has lightning and if it has the seas of liquid methane and ethane that have been theorized. Both ethane and methane are gases on Earth, but are believed to exist in liquid form on Titan because of high pressure and extreme temperatures of minus 292.

After entry into Titan's atmosphere, Huygens shed its wok-shaped heat shield and deployed a series of parachutes. The data were transmitted back to Cassini, which relayed them to Earth.

Titan's images came streaking across the cosmos Friday, and scientists grew increasingly ecstatic with the scenes from the probe, named after Titan's discoverer, the 17th-century Dutch astronomer Christiaan Huygens.

"I think all of us continue to be amazed as we watch our solar system unveil," NASA science administrator Alphonso Diaz said Friday as the extraordinary images were displayed on screens at mission control in Darmstadt. "It challenges all our preconceptions that all these planets are static places."