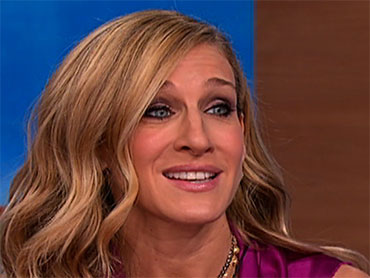 The wait for "Sex and the City 2" is finally over.

Parker told "Early Show" co-anchor Harry Smith Carrie's story is enriched by the return of her old flame -- who she dumped twice during the TV show's run.

"He really serves the story so beautifully -- not just because he's John Corbett -- the actor who came in after having been absent for eight years. (He) just did such beautiful work and complicated the story so perfectly."

Parker said the return of Corbett's character helps with Carrie's issues following the first "Sex and the City" movie's conclusion with her marriage to "Mr. Big."

Parker explained, "What's interesting is Carrie is pondering this story of tradition, and why does she run toward it or away from it, and why was she so committed to this convention of marriage. And she has a book coming out about not being single and she has all this apprehension and concern about its reception -- and where better to ponder this question of tradition and the past and the future than the Middle East?"

But what's behind the great success of the "Sex and the City" franchise?

Parker said it's all about how the women's stories are told.

She said, "Michael Patrick's writing has been the great engine. So if there's a story that we think our audience might respond to, just in terms of the value of it, then we consider it."

She continued, "I think that the greatest challenge when you have an opportunity is to not do the easy thing, is to not be lazy. But to really think about what is right for a franchise, and what is right authentically for these women."

Parker also discussed her life outside Hollywood. She said has all she could ever ask for with her husband Matthew Broderick and her children, twin girls Marion Loretta Elwell and Tabitha Hodge, and son, James Wilkie.

"They're wonderful. Everybody's great," she said. "Everybody slept really well last night, not a peep from any room in the house. I'm a rested mother."