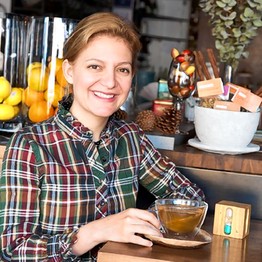 It was the height of the recession when Dawn Cameron decided to start a restaurant in Soho called Sanctuary T. "I imagined it as a spa-like place where people could go and drink tea and it would be like a sanctuary," she explains.

Just as she signed the contract for a $16,000 a month lease, the company where her husband worked, Merrill Lynch, began to teeter-and she discovered she was pregnant. "The timing for everything couldn't have been worse," admits Cameron. When sales at the store grew more slowly than she expected, Cameron worried she'd run out of funds. She had budgeted $150,000 for one year and it was gone within three months. "I was questioning myself and the purpose of the business," she says.

But then something magical happened. When Cameron admitted her fears to employees and customers alike, they changed her thinking. "We had loyal customers. They thought the place was really neat. The staff was into it. Something came together here in this space and everyone wanted me to continue," Cameron says.

Instead of throwing in the towel, Cameron then made some unorthodox business moves that saved her business. "I figured, if I was in it, I was in it all the way," she says. Rather than slashing expenses, she borrowed more money to invest in branding, an inventory management system and a new line of spices called T-Dust.

Today, the company is profitable, the line of spices is in Whole Foods and Cameron is aiming for further growth. "A year ago, I would have considered expanding my restaurant business. Now I feel I can do it," says Cameron.

Laurel Touby is the founder of mediabistro, the largest media community website in the US. Touby is an Internet pioneer, who started her company in 1996, took it to profitability, grew it to millions in sales, and sold it in 2007 for $23 million. She currently is an investor in and advisor to small Internet companies.