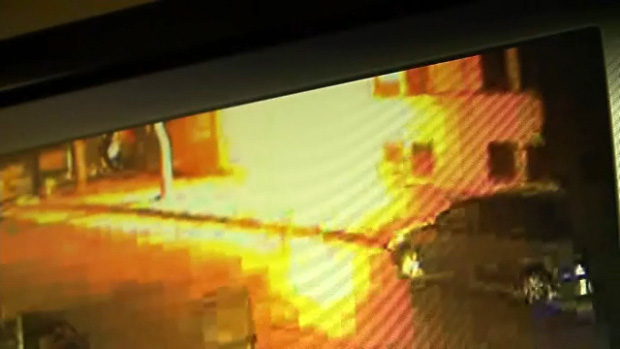 Federal officials have launched an arson investigation into the attack and there are calls from the Chinese government for better protection of diplomats in the U.S.

The blaze on Wednesday night was not being investigated as an act of terrorism, the FBI said.

“An incendiary device fueled by gas was detonated at the consulate,” David Johnson, FBI special agent in charge of the San Francisco division, said at a news conference.

Johnson did not provide any specifics about a possible motive or suspects.

No one was hurt in the fire that charred a doorway, damaged the lobby and burned upward toward the roof.

The building was open for business on Thursday with an increased police presence.

Consulate workers say surveillance footage showed a person coming out of a van parked outside the compound with two buckets of gasoline, pouring it on the front of the building, and setting it on fire, said Wang Chuan, a spokesman for the consulate.

“We strongly condemn this despicable act and have already made representations with the U.S. on the attack,” Wang said. “And we hope that the U.S. takes all necessary measures to provide adequate protection to the consular personnel and properties and bring the culprits to justice as soon as possible.”

The consulate also would not speculate on who might be responsible for the attack, Wang said. The cost of repairs was not yet known.

Lee said he did not know whether the consulate had received any threats or been the target of demonstrations.

U.S. State Department spokeswoman Marie Harf said it was too early to judge whether security at the consulate had been adequate.

“We take this incident very seriously, and the Bureau of Diplomatic Security is working with the FBI and local authorities to investigate and apprehend the perpetrators,” Harf said.

Police and firefighters arrived at the fire around 9:30 p.m. Wednesday and the flames were under control within minutes, fire department spokeswoman Mindy Talmadge said.

The consulate was struck by blaze in March 2008, when a group of people poured flammable liquid on a security gate at the rear of the building and set it on fire. No injuries were reported.

That fire came on the day San Francisco supervisors heard public comment on China’s human rights record months prior to the start of the 2008 Summer Olympics in Beijing. The issue arose because of the scheduled Olympic torch run through San Francisco.

The FBI said the 2008 incident was not related to Wednesday’s fire.

“This kind of shameful attack has no place in California. While we are fortunate there was no injury or major damage, this attack on one of our diplomatic partners must be condemned,” Perez said.