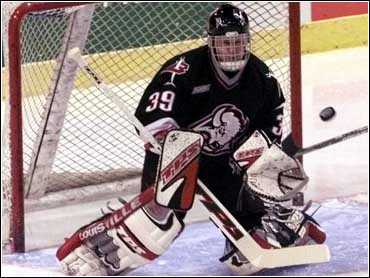 He saw a certain "bounce" during the Sabres' morning skate that has been missing for much of the season.

Now if they can just maintain it.

Stu Barnes scored a pair of goals and Dominik Hasek stopped 30 shots as the Buffalo Sabres beat the Florida Panthers 5-2 on Monday night.

"That was a game we really needed," Ruff said. "If you lose three in a row you start to get that feeling that you never know when you might win again."

The Sabres, who pulled within one point of the eighth-place New York Rangers in the Eastern Conference, got three second-period goals and kept Pavel Bure, the NHL's leading scorer, quiet for much of the night.

The Panthers, 7-11-1 in their last 19 games, are just two points ahead of Washington for first place in the Southeast Division. Florida led by 16 points on Jan. 15.

Florida, which lost for the fifth time in six games, finished the month 5-8, their seventh consecutive season with a losing record in February.

"We're a frustrated team and we're pressing a little too much," Florida captain Scott Mellanby said. "Right now, we're pressing because we want to turn this thing around."

Buffalo led 4-0 before Bure got Florida on the board in the second period with his league-leading 43rd goal. Todd Simpson's third-period goal, his first of the season, cut the led to 4-2.

But Buffalo answered with Richard Smehlik's goal with 11:50 to play and held off the Panthers' late push. Florida finished 0-for-8 on power plays.

The Sabres took a 1-0 lead in the first period with a short-handed goal. Florida's Ray Whitney tried to keep an airborne puck in the offensive zone by reaching high above his head to snare it. But he missed, starting a 2-on-1 break the other way.

Michael Peca skated up the right side and crossed the puck to Barnes, who beat Trevor Kidd at 18:09.

"When they got that short-handed goal, we kind of came apart for a little bit there," Mellanby said.

The Panthers misfired on a 3-on-1, and Buffalo's Vaclav Varada found Alexei Zhitnik who had just left the penalty box alone at the blue line for a breakaway goal.

The Sabres scored again about a minute later. Erik Rasmussen scored off a faceoff, skating through the Panthers' defense and beating Kidd at 5:24.

Barnes got his second goal of the night and 16th of the season at 12:45 of the second. Barnes' first shot rebounded off Kidd's leg and he appeared to push the puck in with his upper body. Referees initially said it was not a goal, but reversed the call after reviewing the play.

"We're just making bad decisions," Simpson said. "It's painful. We've got guys who are trying to score right away. We're taking some risks. We're jumping up when we need to stay back. We need to play more of a safe game, a smarter game."

The 4-0 lead sent Kidd to the bench. Kidd, 0-2 since returning from a shoulder injury, was replaced by Mike Vernon.

"It was a huge win for us," Buffalo's Miroslav Satan said. "It was like a playoff game for us. We really needed those two points."