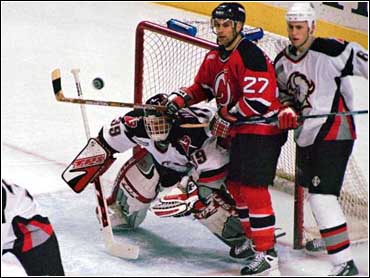 For Buffalo Sabres forward Geoff Sanderson, 10 seconds wasn't too long to wait before taking a shot.

Sanderson controlled the puck in the right faceoff circle and patiently held out for the perfect play. His power-play goal with 3:59 to go lifted the Sabres to a 3-2 victory Monday night over the New Jersey Devils.

"In that situation, you want to work up and down the wall and get their guys moving," said Sanderson, who has four goals in six games. "(Devils defenseman Scott) Stevens happened to take one or two steps back, and I got the screen shot through him."

The delay threw off Devils goalie Chris Terreri as well.

"He kept going back and forth with it," Terreri said. "I lost it for a second. That's one I'd like to have back. It hit just the right spot."

Dixon Ward and Miroslav Satan also scored and Dominik Hasek made 35 saves for his 200th career win. The Sabres moved one point ahead of the New York Rangers for the eighth and final playoff spot in the Eastern Conference.

The Sabres and Rangers, each with 21 games remaining, meet Friday night at Marine Midland Arena.

Scott Gomez and Brian Rafalski had goals for the Devils, who lost two in a row for just the fourth time this season. Terreri stopped 22 shots.

"This puts us back in the playoffs," Buffalo coach Lindy Ruff said. "Any time you beat the tem that's leading your conference, you're making a statement."

Devils coach Robbie Ftorek was pleased with his team's performance despite the outcome.

"We played well," Ftorek said. "We didn't play five periods of good hockey prior to this, but tonight we played three solid periods."

The power play leading to Sanderson's 11th goal came after Terreri was assessed a minor for tripping the Buffalo forward.

"I didn't come within six feet of him," Terreri said. "That's the way the game goes."

Rafalski tied the game at 2-2 with 9:08 left when he picked up a puck that deflected off Buffalo defenseman Dimitri Kalinin. He fired it past Hasek for his fourth goal.

Satan gave Buffalo a 2-1 lead on the power play with his 29th at 9:38 of the third. His slap shot got between Terreri's pads after the goalie redirected the puck to the point.

Gomez opened the scoring 4:13 into the second, with a power-play goal. The rookie tapped in a rebound for his 16th tally after Hasek made an initial stop on Patrik Elias.

Ward tied it with 19 seconds to play in the second on his seventh goal. Maxim Afinogenov skated nearly the length of the ice, only to have Terreri stop his shot. Ward tapped in the rebound for his 200th career NHL point.

"He was a huge difference in the game," Ruff said.

Hasek's play backstopped a good performance by the entire squad.

"You could see that Dom was getting into their heads," Sanderson said. "They had a lot of great chances, and you could see their forwards getting frustrated. When Dom's doing that, our team just builds off that."

The Devils lost for just the third time in regulation in their last 26 games.