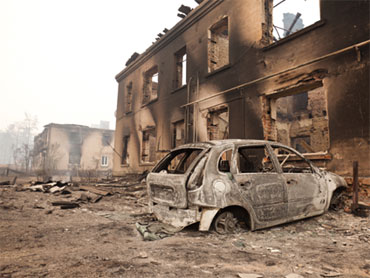 Russia sent the army on Saturday to battle wildfires that have killed at least 28 people and were threatening dozens of towns and villages. Thick smoke and ash slowed firefighting efforts and thousands of people were being evacuated.

Half of the 300 homes in the village of Maslovka, half a day's drive south of Moscow, were reduced to cinders. Stunned locals sifted through the ash for possessions to salvage and people pooled what little food they had - mainly potatoes and carrots - to ensure no one starved.

"This is a catastrophe," Maslovka resident Yevgeniya Yuzhina said as she waited in a hotel lobby in the nearby city of Voronezh filling out a form to receive cash compensation.

All 300 of the army's fire trucks have been dispatched, Defense Minister Anatoly Serdyukov said,

Many regions of the country are suffering through their hottest summer since record-keeping began 130 years ago. Officials said Friday over 214,136 acres of parched woodland and peat bog were burning in at least 14 of the country's 83 regions, mainly in western Russia. State television reported Saturday that the death had risen from the last reported figure of 25, without providing details.

"Fire and wind have no days off, so we can't take any days off," Prime Minister Vladimir Putin said in a videoconference with emergency officials, where he announced 3 million rubles ($100,000) would be allocated for each of the 1,200 homes destroyed so far. He pledged that all would eventually be rebuilt.

Yuzhina said her house had been worth half a million rubles more than the amount Putin pledged and her husband, daughter and elderly parents now had no place to go.

"We're placing all our hopes on Putin," Ivan Kosinov, an unemployed 46-year-old, said as he waited in line.

In the industrial city of Togliatti, in central Russia, 2,000 children were evacuated from a summer camp as a state of emergency was declared, the state ITAR-Tass news agency reported.

The rural Voronezh and Nizhny Novgorod provinces were the worst-affected, Rossiya-24 TV reported.

The Nizhny Novgorod region's governor, Valery Shantsev, said in televised remarks Saturday that the situation there remained grave because thick smoke was preventing firefighting planes from dumping water on the blazes.

Fires that had encircled Voronezh, a city of 850,000 people about 300 miles (475 kilometers) south of Moscow, this week were not visible Saturday, and officials reported they had been brought under control. Thick plumes of smoke from distant blazes were drifting into the city center, where some refugees were staying in hotels.

Five people, including one firefighter, were killed by wildfires in Voronezh, and six residents and a firefighter died when a fire swept through the village of Mokhovoye in the Moscow region, officials said. The other deaths occurred south or east of Moscow.

Putin on Friday visited Verkhnyaya Vereya, a village in the Nizhny Novgorod region where all 341 homes were burned to the ground and five residents were killed.