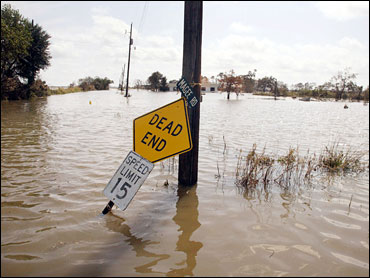 While much of Texas and Louisiana dodged the worst of Hurricane Rita, the damage to some small, rural towns was virtually complete — and the storm was being blamed on new deaths long after it moved away.

As temperatures climbed well into the 90s and the heat index was near 106 degrees Monday, the damage from the storm was evident in small communities in southwest Louisiana and southeast Texas.

The soaring temperatures sparked a run on generators, reports CBS News Correspondent Randall Pinkston, as survivors of Rita tried not to become victims of the heat.

Officials Tuesday morning were still trying prevent residents from returning to Beaumont and Port Arthur, reports CBS News Correspondent Steve Futterman. Highways exits were blocked by Texas state troopers, but many residents were still finding ways to get back inside. Officials until power is restored they say the area is unsafe, and both cities remain essentially empty, says Futterman, with no firm indication when residents will be officially allowed back.

"East Texas needs everyone's attention this hour, right now, and it doesn't matter whether it's the state or FEMA or the Corps of Engineers. I don't really care whose fault it is. It needs help now," said U.S. Rep. Kevin Brady. "These communities are the last to complain, but they've reached the end."

While residents of the towns like Beaumont and Port Arthur and Orange were blocked from returning to their homes because of the danger of debris-choked streets and downed power lines, authorities in Louisiana were unable to keep bayou residents from venturing in to see if Rita wrecked their homes.

"This is bad," Renard said. "One of my friends had water to the roof."

She got a lift on a truck, through the high waters, and found more than 20 inches of waters in her home, and nothing salvageable.

"No furniture, no nothing, except things on the top," Renard said. "The beds — everything's gone."

And she doesn't have flood insurance, because in her 15 years there in Iberia Parish, she says she's never been flooded before.

Debris was strewn for miles over Cameron Parish, a coastal, sparsely populated town next to the Texas line. Seawater pushed as far as 20 miles inland, drowning acres of rice, sugarcane fields and pasture.

An estimated 80 percent of the buildings in Cameron, population 1,900, were leveled. Farther inland, half of Creole, population 1,500, was left in splinters.

Down the beach from Cameron is the town of Hawley Beach, which

CBS News Correspondent John Blackstone (video)
reports was a small community of about 150 permanent residents and a number of beach houses. The beach houses were completely wiped away, and all that is left are the footprints of the houses. Not even the debris was left on the beach, driven inland by the powerful waves and the winds.

Jefferson County, Texas, officials say they asked FEMA for heavy duty generators to power hospitals, pumping stations and other essential services. And the officials tell Pinkston that FEMA sent the generators but refused to release them. Most of the generators are sitting at a FEMA staging site on the outskirts of Beaumont.

"After what happened in Katrina, this shouldn't have happened," said Jefferson County Chief Judge Carl Griffith.

The portable generators are needed because Hurricane Rita damaged nearly 300 tall tower transmission lines which get the juice to substations.

"We probably have somewhere between 11- and 15,000 distribution poles" that bring the power into homes down, said Entergy president Joe Domino. It could be months before they are all replaced.

If the power knocked out by the storm and oppressive heat weren't enough, it was the ravenous mosquitoes invading their storm-damaged home north of Vidor, Texas, that convinced Harry Smith, his wife and two teenage boys to get out.

With their car disabled by a transmission problem, they hitchhiked more than 10 miles to a staging area for teams from the Federal Emergency Management Agency in hopes of finding shelter. Authorities put them on a bus to San Antonio with a few dozen other storm victims.

"It can't be any worse than here," said Smith, 49, a pipefitter, relieved to be going somewhere to get out of the heat and insects. "This is the worst storm I've seen in the 46 years I've lived here."