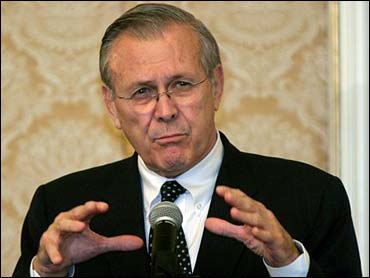 Far fewer military bases are likely to be closed and realigned than originally foreseen, in part because of the planned shift of tens of thousands of troops from bases in Asia and Europe to the United States, according to Defense Secretary Donald H. Rumsfeld.

Rumsfeld said surplus base capacity is not as great as earlier estimated — an assessment that will be comforting to communities hoping to retain bases they rely on for an economic boost.

"Without final figures, I would say the percent will be less than half of the 20 to 25 percent that has been characterized previously," Rumsfeld said in a conference call Thursday with newspaper editorial writers across the country, according to two writers who were on the call.

Rumsfeld had previously said the current round of base closings and realignment — the first since 1995 — would result in less shrinkage of base capacity than the 20 to 25 percent figure the Pentagon has cited for the past few years. But he had not previously said it might be less than half that range.

Sen. John Cornyn, R-Texas, said in an interview Friday that in a meeting on Feb. 8 Rumsfeld told him and Sen. Kay Bailey Hutchison that about 15 percent of base capacity would be cut.

Rumsfeld has until May 16 to recommend which domestic bases should be closed or realigned. His recommendations will be the basis for deliberations by the independent Base Closing and Realignment Commission, which will submit its own list to President Bush by Sept. 8.

The Pentagon wants to close some bases to save money over the long run, and base realignments are aimed at advancing the ability of the military services to operate and train together.

States and cities are trying to avoid closures by making the case that their bases are crucial for national security. They have hired high-powered lobbyists with Washington connections and tried to make their facilities — through new construction and other improvements — more resistant to closure.

The Pentagon declined to release a transcript of Rumsfeld's remarks to the editorial writers until their editorials have been published. Two of the writers confirmed in telephone interviews Friday that Rumsfeld made the statement that the reduction in base capacity would be less than half the 20 to 25 percent range.

J.R. Labbe, editorial writer for the Fort Worth Star-Telegram, said she pressed Rumsfeld on this point, noting that his words suggested that only 10 to 12 percent of capacity would be eliminated in this round of base closings. She said Rumsfeld did not dispute her characterization.

"He did not try to back off on that," she said.

Andrea D. Georgsson, editorial writer for the Houston Chronicle, confirmed that Rumsfeld did not object to the 10 to 12 percent estimate, although he did not use those figures in his own comments.

Rumsfeld also made clear that he has not made final decisions about his set of recommendations to the commission. Pentagon officials say he might submit his recommendations next Friday rather than wait until the deadline of May 16.