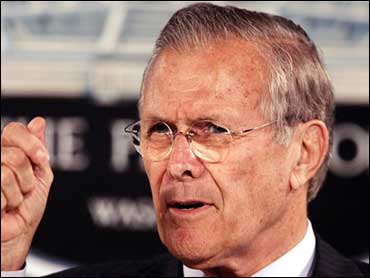 Defense Secretary Donald Rumsfeld said Tuesday he supports the nomination of a general as the head of the CIA, and said the Pentagon is not trying to take more control of intelligence matters.

Also Tuesday, Rumsfeld said that in light of prewar intelligence failures in Iraq, U.S. officials must be extra careful in evaluating intelligence about Iran's nuclear program.

Rumsfeld was asked how confident the American people should be in the reliability of the intelligence that is being produced on Iran and its nuclear intentions, given what happened with Iraq.

He responded by noting the failure on Iraq, whose alleged weapons of mass destruction were the chief public justification given by President Bush for invading in March 2003 to overthrow the regime of Saddam Hussein.

"It turns out it was wrong, that intelligence. Fair enough," he said. "It's a tough business. It's a difficult thing to be right all the time. And the information was not correct. Does that give one pause? You bet."

President Bush's selection of Air Force Gen. Michael Hayden to head the CIA has raised questions from congressional Republicans and Democrats over his ability to be independent from the military establishment, as well as his ties to a controversial eavesdropping program.

Rumsfeld said there have been military leaders of the spy agency in the past and that having one now would pose no conflict with the Pentagon.

Hayden, who now is deputy director of national intelligence, formerly headed the National Security Agency and is a 37-year Air Force veteran.

Some members of Congress, voicing concern about having a military person in charge of the civilian CIA, have suggested that Hayden resign his commission.

Rumsfeld did acknowledge that he and Hayden had taken different positions on at least one issue — whether to move the National Security Agency from the Defense Department's control to National Intelligence Director John Negroponte's control. Hayden thought it should be moved, and Rumsfeld said he did not. President Bush ultimately decided not to move it.

On another matter, Rumsfeld urged Congress to pass an emergency spending bill that contains $65 billion for war-related expenses for the Pentagon. He referred specifically to the House having cut from the spending measure about $760 million that the Pentagon says it needs for training Iraqi and Afghan security forces.

"A slowdown in training and equipping the Iraqi security forces will have unacceptable, harmful effects of postponing the day when our men and women in uniform can return home with the honor and appreciation they deserve," he said.

Asked how the prewar intelligence failures with regard to Iraq affect his thinking about the reliability of intelligence on Iran's nuclear program, Rumsfeld said he realizes that intelligence is sometimes flawed.

"It's a tough business. It's a difficult thing to be right all the time," he said. "And the information was not correct" on Iraq's weapons of mass destruction. "Does that give one pause? You bet," particularly in light of the fact that Iran is a relatively closed society. "So clearly one has to be very careful."