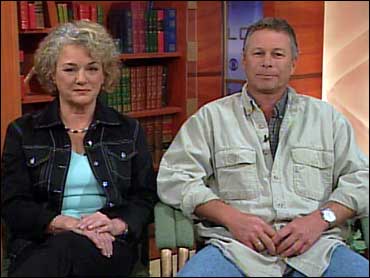 It was one year ago this week that a massive mudslide slammed into the California coastal community of La Conchita, killing 10 people.

When The Early Show national correspondent Hattie Kauffman covered the story, she introduced us to a woman who survived the ordeal thanks to a friend.

The event changed both their lives.

Diane Hart was in her home when the wall of mud came rushing down. She recalls seeing her neighbors running down street. In an instant, the mountain was upon her.

"I was being banged and bumped by boards and glass and nails and dry wall," she said. "I was pushed through my house, through the wood fence, and into the house next door."

Hart found herself entombed under 10 feet of mud and debris. Frantically searching for her was her longtime friend Brett Johnston.

"I always said to her, 'If anything was ever to happen, Diane, I'm going to come for you,' " said Johnson.

Hart was the last person pulled out alive. At the hospital, she shared with Kauffman the remarkable story of her rescue.

"I had a pocket of space right in here," she says pointing to her arm, "a little tiny pocket between my face and my thighs.

Hart says she had to remind herself to breathe.

I just didn't want to die that way," she said. "I never pictured myself dying that way and I couldn't do that to my family."

Meanwhile, Johnston was frantically clawing at the dirt with his bare hands.

Hart said she could hear people walk around and would yell for help. Then Johnston started yelling for Hart.

"And he said, 'Diane, you know how I always said I would save you. I'm going to save you,' " Hart said. She yelled his name.

Even after they heard each other's voices, it took four to five hours before Hart was carried to safety.

"When they retrieved her out of the little crevice that she was in, everything kind of stopped for a moment," Johnston said.

After saving Hart's life, they started a new life together.

"Well, it was gradual," Hart said. "I needed a lot of help when I finally recovered from my injuries and moved out of my son's house. I needed help because I had to buy everything new — furniture and dishes and all the household belongings that I'd lost. So I'd call on Brett to help me carry something up the stairs. He was just always there to help me. One day he just put his arms around me and held me and I just felt so safe. This was the man I could depend on to take care of me and save me."

What was the moment when Johnston realized he could not live without Hart?

"We've just always been so close," he said. "We never really lost contact with each other. And throughout what had happened, it just brought us much closer."

The couple previously had a four-year relationship, but broke up four months before the mudslide and were dating other people.

When did Hart realize that Johnston was the one for her?

"You know, it was that moment when he put his arms around me and I just felt so safe," she said. "And I realized that no one else is crawling under that mountain to get me but him."

Are there wedding bells in the future?

"Well, when we dated, Brett wanted to get married," said Hart. "I've been married for 25 years, and I needed to be single for awhile. So that was sort of one of our conflicts and why we broke up. And now that we're back together, we're not focusing so much on that as we are just enjoying each other every day and doing things together."

Since the mudslides, Hart moved about 15 minutes away from La Conchita, but went back this week for a memorial.

She says she needed to mourn the loss of her neighbors and friends.

"I was in the hospital recovering when the memorials occurred right after the mudslide and I always just felt that lacking — that I'd never said goodbye to my friends," she said. "I had never properly mourned their passing and their deaths. And I needed to do that for my own healing."

Johnston still lives in the town.

"Well, the whole social aspect of the town is diminished from what it used to be before the hillside came down. But we're all still very close," he said.