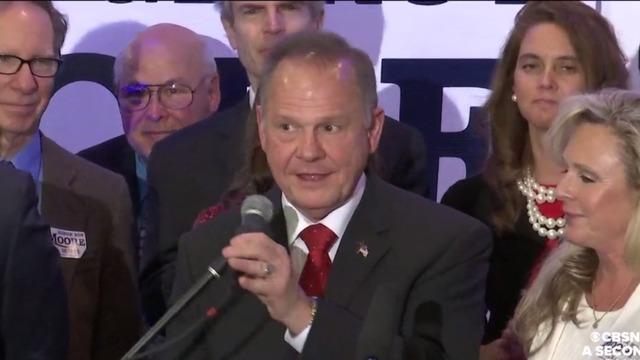 The Republican National Committee (RNC) is once again backing Judge Roy Moore in his race for Alabama's open Senate seat, CBS News' Steve Chaggaris confirmed, according to an RNC official.

The RNC's decision came after President Trump gave Moore his endorsement Monday, as Breitbart News first reported. According to Breitbart, the RNC told its Alabama members on Monday afternoon that it would resume its financial support of Moore. The national party had pulled its support soon after the Washington Post published an explosive story that alleged Moore had, while he was an assistant district attorney in his 30s, pursued teenage girls and had sexual contact with a 14-year-old girl.

Many Senate Republicans had urged Moore to step aside, while President Trump urged Alabamans not to support Jones, whom he disparaged in a tweet as "WEAK" on crime and border security, "BAD" for the military, veterans, gun rights, and itching to raise taxes "TO THE SKY."

Monday, Mr. Trump officially gave Moore his support. He tweeted early Monday that "Democrats refusal to give even one vote for massive Tax Cuts is why we need Republican Roy Moore to win in Alabama."

It was the president's most full-throated endorsement of Moore, whom he also spoke to by phone Monday.

"The President had a positive call with Judge Roy Moore during which they discussed the state of the Alabama Senate race and the President endorsed Judge Moore's campaign," said White House deputy press secretary Raj Shah.

"The people of Alabama are going to decide a week from Tuesday who they want to send to the Senate. It's really up to them. It's been a pretty robust campaign with a lot of people weighing in. The president and I of course supported somebody different earlier in the process. But in the end the voters of Alabama will make their choice," McConnell said in a Sunday interview on CBS' "Face the Nation."

Voters head to the polls next week, on Tuesday, Dec. 12.