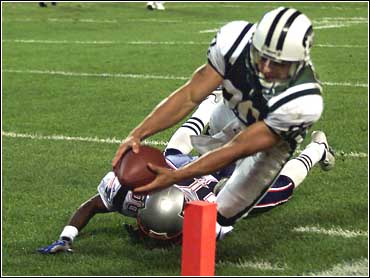 Nothing cements a marquee match-up like a good old-fashioned rivalry. For fans of the New York Jets and New England Patriots, they'll taste sweet revenge or bitter defeat when they square off on Monday Night Football.

The Jets make the short trip to Foxboro to visit the division rival Pats. With the two teams sharing an AFC-best 9-2 record, there's more than pride at stake - this game could decide who gets a first-round bye and home-field advantage throughout the playoffs.

One can date this famous rivalry back nearly half a century; pre-Joe Willie, when New England was known as the Boston Patriots, and both teams were played in the AFL (American Football League) until the league merged with the NFL in 1969.

Looking back only 13 years and it's easier to understand why this famous football rivalry has reached its boiling point. Remember when Bill Parcels jumped ship as the Patriots head coach to the Jets (sacrilege!)? When "Spygate" cost the Patriots $750,000 in fines, a first-round draft pick in 2008 and severed the relationship between former Jets coach Eric Mangini and his former mentor, Patriots coach Bill Belichick?

How about Curtis Martin's defection to Gang Green? Or Belichick's short (really short)-lived tenure in New York leading the Jets? The list goes on and on and we haven't mentioned the name Rex Ryan.

This match-up will almost certainly look different than their meeting in Week 2 (the Jets won at home 28-14) and much has changed since then for both teams. The most obvious of which can be found at the wide receiver position, with the Patriots giving Randy Moss the pink slip and the Jets finding a big play threat with the return of  Super Bowl MVP Santonio Holmes, back after a four-game suspension at the start of the season.

The Patriots also have a new running threat with the addition of Danny Woodhead (who was picked up earlier in the season after being cut by the Jets) and added playing time for BenJarvus Green-Ellis. The Jets have shutout cornerback Darrelle Revis at full strength and the Patriots decided to go retro and bring back receiver Deion Branch, who brought the best out of quarterback Tom Brady before Moss was picked up in 2007.

Brady also boasts a 25 game win streak at Foxboro and the Patriots last loss at home with their star quarterback under center was in 2006. Guess who beat them? The Jets.

While both teams have evolved significantly over the course of the past 11 weeks since their first divisional game, division rivals generally have each others' number, playing twice a season, every season. While Belichick and Ryan will certainly have tricks up their sleeves, expect this game to come down to defense  - New England's 32nd-ranked defensive unit will have much to prove against the Jets, who boast the 3rd-best defense in the league.