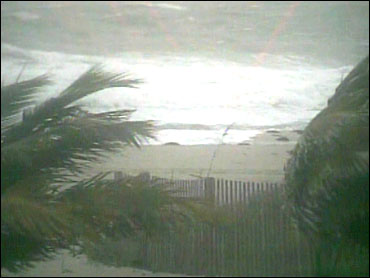 Rita strengthened into a hurricane on Tuesday as it lashed the Florida Keys with heavy rain and strong wind, threatening the island chain with a storm surge of up to 7 feet and sparking fears the storm could eventually bring new misery to the Gulf Coast.

Rita became a Category 1 hurricane with sustained top wind of 75 mph during the morning, said meteorologist Michelle Mainelli at the National Hurricane Center in Miami. She said the wind speed was confirmed by data collected by a reconnaissance plane sent into the storm.

Thousands of residents and tourists had fled the Keys in advance of Rita, which forecasters said could dump up to 15 inches of rain on parts of the low-lying island chain.

Rita promised to gain more strength as it crossed the warm Gulf of Mexico for a weekend landfall, most likely in Texas although Louisiana could end up in its path.

Officials of Galveston, Texas — nearly 900 miles from Key West — were already calling for a voluntary evacuation. Louisiana Gov. Kathleen Blanco urged everyone in the southwest part of the state to prepare to evacuate.

Hurricane warnings were posted for the Keys and Miami-Dade County, the National Hurricane Center said. Residents and visitors were ordered to clear out of the Keys, and voluntary evacuation orders were posted for some 134,000 Miami-Dade residents of coastal areas such as Miami Beach.

At 8 a.m. EDT, Rita was centered about 100 miles east-southeast of Key West. It was moving between west and west-northwest at nearly 15 mph, according to the hurricane center.

South Floridians had kept a wary eye on Rita, which threatened to arrive Tuesday and drop up to 15 inches of rain on some parts of the low-lying Keys. Oil prices surged on the possibility that oil and gas production would be interrupted once again.

Authorities are now making plans to get anyone who made it back out of the city, reports CBS News Correspondent Cami McCormick. Three military ships are making plans to leave, and New Orleans Mayor Ray Nagin said the military has plans for evacuating its personnel. For others, hundreds of buses are ready to roll. They will load up passengers in downtown New Orleans and on the west bank, but also on the southwest Louisiana coast.

From Havana, CBS' Portia Siegelbaum reports Cuban Civil Defense authorities were maintaining a hurricane alert in six provinces including the capital and a hurricane watch in two others. At midday Tuesday, Rita was passing north of the famed Varadero beach resort and was expected north of Havana around 4 p.m.

Despite the storm's distance from the island, school were closed Tuesday. Before learning that the storm would most likely bypass the island, Cubans could be seen stocking up on bottled water, bread and canned goods.

The storm's outer rain bands began drenching the Keys and Miami-Dade County early Tuesday after felling trees in the Bahamas. Shortly before it was upgraded to hurricane status, it was moving west-northwest at 15 mph.

In the Florida Keys, it's typically tough to get a hurricane warning taken seriously. Not this time. People not only heard the order to get out, they listened — residents and tourists alike.

"You've got to be smart about it and if you don't respect it after what happened to Katrina, it's disrespectful not to leave when they tell you to leave," said a tourist.

But by Tuesday morning, emergency officials said it was too late to leave, and anyone left should simply go to a shelter, reports CBS News Correspondent Mark Strassmann.

Rita is the seventh hurricane to hit Florida in the last 13 months, and the 17th named storm of the Atlantic hurricane season, making this the fourth-busiest season since record-keeping started in 1851. The record is 21 tropical storms in 1933.

"I'm calling for a voluntary evacuation of Galveston," Texas, said Mayor Lyda Ann Thomas. Forecasters said Rita could make landfall in Mexico or Texas by the weekend, with a possibility that it could turn toward Louisiana.

"I don't think we're going to have to really strongly enforce it," he said. "Anybody that comes back to New Orleans and sees the devastation from Katrina and realizes that there is another category 3 storm out in the Gulf, they should leave pretty quickly."