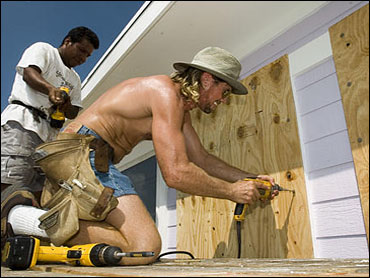 Hurricane Rita grew into a Category 4 storm Wednesday, as forecasters said its winds have reached 135 mph as its churns toward landfall later this week on the Gulf Coast.

Mandatory evacuations have already been ordered for New Orleans and Galveston, Texas, one day after Rita skirted past the Florida Keys as a Category 2 storm, causing minimal damage.

"What we're in the process of doing now is working very closely with the state of Texas and local authorities, pre-positioning assets, food, supplies, helicopters, medical teams, getting them ready to go when the storm hits," he said Wednesday on CBS News' The Early Show. "And I think we're going to be ready when it does make landfall."

Acting FEMA Director R. David Paulison said the agency has aircraft and buses available to evacuate residents of areas the hurricane might hit. Rescue teams and truckloads of ice, water and prepared meals were being sent to Texas and Florida.

"I strongly urge Gulf coast residents to pay attention" to the storm, he said.

"The biggest concern would have to be along coastal sections of Texas and parts of Louisiana, probably the western shoreline of Louisiana," said CBS News Meteorologist George Cullen. "The most vulnerable areas right now would probably be in the Galveston Bay region, because of the low elevation and the big body of water."

Stung by criticism of the government's slow initial response to Hurricane Katrina, President Bush signed an emergency declaration for Florida and spoke with Texas Gov. Rick Perry about planning for the storm's landfall.

"Look, a category 4, category 5 storm is going to be catastrophic. Everyone understands that. But this state is as prepared as humanly possible," Perry said.

Texas has even recalled hundreds of its emergency workers helping other states with Katrina, because they may be needed at home, reports CBS News Correspondent Mark Strassmann.

Some 130,000 people were evacuated in Cuba, on the southern side of the Florida Straits. The storm churned up roiling waves and soaked the northern coast as it made its way past Havana.

Electricity, gas and water services were interrupted in neighborhoods around the capital of 2 million and some streets were flooded. Havana's international airport was closed to incoming and outgoing flights.

Rita created relatively few problems along the Florida Keys, where thousands of relieved residents who evacuated are expected to begin returning in earnest on Wednesday.

During daytime hours, several stretches of the Keys highway, U.S. 1, were barricaded because of water and debris; by nightfall, only one small problem area remained and the entire highway was passable, the Florida Highway Patrol said.

There were reports of localized flooding, and some sections of the Lower Keys were still without power early Wednesday. But the storm's raging eye did not hit land.

"It was fairly nothing," said Gary Wood, who owns a bar in Marathon, about 45 miles northeast of Key West. "It came through and had a good stiff wind, but that was about it."

In Key Colony Beach, an oceanfront island off Marathon, Mayor Clyde Burnett said a restaurant and hotel were damaged by water and wind, but that widespread problems simply didn't arrive as expected.

"It could have been worse. We could have lost our whole house," Keys resident Jackie Hanna told CBS News.

Visitors ordered out of the Keys will be invited back Friday, and virtually all other voluntary evacuation orders in South Florida were lifted after Rita roared past.

Now, all eyes following Rita are turning toward the Gulf — where the hurricane is causing new anxiety among Katrina victims in Mississippi, Louisiana and Alabama.

At 8 a.m. EDT, Rita's eye was about 195 miles west of Key West and about 790 miles east-southeast of Corpus Christi, Texas. The storm was moving west at 14 mph — a track that kept the most destructive winds at sea and away from Key West.

"There's still plenty of warm water that it needs to move over in the next couple days. The forecast is favorable for further intensification," said Michelle Mainelli, a meteorologist at the National Hurricane Center.

Those were words that Gulf coast residents certainly did not want to hear. Even those who had survived major hurricanes were getting ready to leave, not wanting to challenge Rita's potential wrath or cling to hope that they'd be spared in the same manner the Keys were.

"Destination unknown," said Catherine Womack, 71, who was boarding up the windows on her one-story brick house in Galveston. "I've never left before. I think because of Katrina, there is a lot of anxiety and concern. It's better to be safe than sorry."

About 80 buses were set to leave the city Wednesday bound for shelters 100 miles north in Huntsville. The buses were part of a mandatory evacuation ordered by officials in Galveston County, which has a population of nearly 267,000.

"We've always asked people to leave earlier, but because of Katrina, they are now listening to us and they're leaving as we say," said Galveston Mayor Lyda Ann Thomas.

The hurricane season isn't over until Nov. 30.